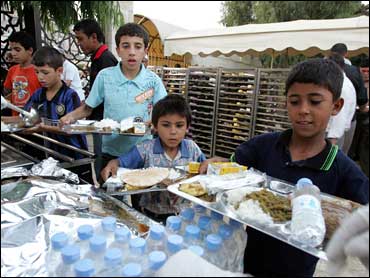 The government media campaign - one of the Arab world's first - aims to combat the serious health problems, from heart attacks to diabetic comas, that often mark Islam's holy month.

Ramadan - traditionally a time of abstinence and focus on prayer in the Muslim world has also become, health officials worry, a time of overdoing it and unhealthy habits.

Fasters who abstain from food, water and smoking during the day sometimes binge at night to make up, with heavy, rich meals or parties going to dawn. Traditionally, the observant break their fast at sunset with a date, then move to richer meals of lamb or other meat, rice, potatoes - and super-sugary Ramadan sweets.

Many survive without daytime water during this year's scorching September heat - which can cause intense thirst - by sleeping in the afternoon and avoiding exercise or too much activity.

The elderly, sick, travelers and children are traditionally exempt from Ramadan's fasting. But in reality, many elderly people and those with chronic health problems like diabetes do routinely fast. Diabetics can be in particular danger if their blood sugar levels fluctuate.

The issue is of concern all across the Mideast, where health problems caused by obesity and smoking eat up ever-larger percentages of government's national health budgets. A growing middle class in affluent countries like Saudi Arabia and the United Arab Emirates has led to both more obesity and a greater focus on health care.

Jordan, as one example, now spends an estimated one-fifth of its government budget on health care.

In Dubai and Saudi Arabia, newspapers routinely urge healthy eating and exercise during the fasting month. One of the region's most watched TV stations, Saudi-owned al-Arabiya, also is airing a healthy-eating segment in many newscasts this month. Tuesday's tip: Bake rather than fry the traditional Ramadan pastries filled with meat and cheese.

Jordan's government is thought the first, however, to sponsor Ramadan-specific public service health spots. The campaign is headed by Jordan's King Abdullah II and his wife, Queen Rania - who often speak publicly about their own exercise-filled lifestyles and healthy diets.

Jordanian officials said they could not yet assess the TV campaign's impact.

"Fasters adopt suicidal habits," said campaign director Inaam Barrishi. "We want them to get healthy." She added: "If the cartoon influences even 7 percent of Jordanians, then we'll consider it a success."

Dr. Sultan Abdullah, a health ministry official, said those who fast "go to the extreme because they feel deprived of their daily routine. ... It'll take awhile to change people's behavior, but this is a good start."

In one of the 15 cartoon commercials that air on state TV at dusk, a middle-class Arab husband and father asks his wife, "What do you think I am - a sheep?" after she offers him a light meal of yogurt, tomatoes and cucumbers, saying it won't raise his cholesterol.

In the end, the cartoon husband eats the meal, as a doctor tells viewers: "Eat very lightly before you fast. Your meal must be rich in fiber, like multigrain bread, fruit, vegetables and dairy products" to avoid intense hunger during the day.

"Think right, live healthy and your life will become better and better," the catchy tune ends.

Another cartoon tackles smoking - a major health problem in most Arab countries. Half of Jordan's population is believed to smoke, despite a largely ignored ban on smoking in public.

In that cartoon, the same Arab husband and father, Abu-Saleem, tries to help a friend kick the habit after being forced to stop smoking by his own doctor. The friend has stopped smoking during daylight to observe Ramadan, Abu-Saleem notes - so why not stop altogether?

"I can't," the friend answers. "But if I could, Ramadan would be sweet indeed."

Amman shopkeeper Awad Nazzal, 28, said he watches the cartoons because "they're amusing, just like Tom and Jerry."

"But they mean little to me," he said. "I can't stop smoking, or eat little after the fast. It's just hard."