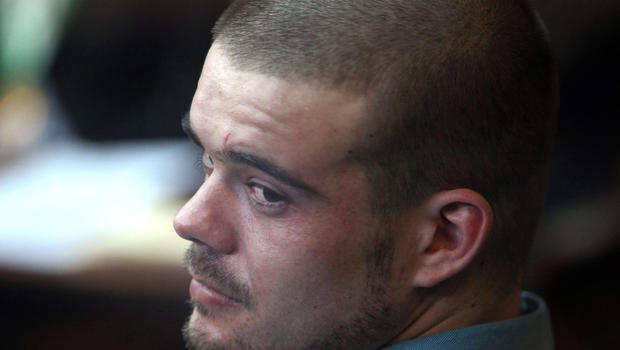 Wedding season is upon us and one of the most surprising nuptials of this season is about to take place inside a maximum security prison in Peru. The groom is Joran van der Sloot, the Dutchman convicted of murdering a young woman in a Lima hotel room in 2010. But van der Sloot may be most infamous for being the main suspect in the disappearance of Natalee Holloway in Aruba in 2005.

The bride, Leidy Figueroa , is a 24-year-old from Lima. Her dress won't come from Kleinfeld's, and Randy Fenoli of the TLC network's "Say Yes to the Dress" isn't helping the bride choose her gown. But the wedding is sure to make news, nevertheless.

Joran van der Sloot is scheduled to say "I do" on May 22 at about noon, according to Figueroa, who spoke to CBS News' Crimesider. The civil ceremony will take place inside the Piedras Gordas prison, where van der Sloot is serving a 28 year sentence for murder. Figueroa tells Crimesider that the witnesses will be van der Sloot's Peruvian lawyer, Maximo Altez, and Figueroa's godmother.

Joran van der Sloot's family in Aruba will not be attending the wedding. But his mother has met his intended during her earlier visits to Peru.

The bride-to-be tells Crimesider that she met van der Sloot in July 2010 when she went with a cousin to visit another inmate. That inmate acted as a matchmaker for Figueroa and van der Sloot, and since then Figueroa has been visiting the prison twice a week. She says she always brings home-cooked meals to her husband-to-be.

In 2012, Joran van der Sloot was convicted of killing Stephany Flores in a Lima hotel after the two had met earlier at a casino poker table. The Flores murder happened five years to the date after Alabama teenager Natalee Holloway disappeared in Aruba. She was last seen in May 2005 with van der Sloot. Holloway has never been found and van der Sloot was never charged in connection to her disappearance.

Figueroa has recently bought a house near the prison, and says she is five months pregnant with van der Sloot's child; the baby is due in September. According to van der Sloot's lawyer, the Dutchman is studying international business management through correspondence courses from a Peruvian university.

Figueroa tells Crimesider that Joran van der Sloot has transformed himself "into a new person." She also says that van der Sloot is enjoying his prison arts and crafts classes.

Van der Sloot had his lawyer get the wedding ring last year, according to Figueroa. The ring has a small stone, not a diamond. The bride is still looking for a wedding dress. She is also working on getting a permit to videotape and photograph the ceremony.

There will be no reception at the prison. But Peru media reports that van der Sloot has two close friends in Peidras Gordas. They are "Crazy David" Sanchez and "El Cholo" Payet, two soccer hooligans each serving 35 years for a homicide during a soccer game in 2011.

A Dutch newspaper reported in February that van der Sloot recently claimed he'd seen a bright white light in his cell and that it was the image of Dutch TV medium Robbert van den Broeke. So if the van der Sloot-Figueroa wedding should morph from curious to paranormal perhaps no one should be surprised.

Joran van der Sloot has served four years of his 28 year sentence for the murder of Stephany Flores. When he is released from prison in Peru he will be extradited to the United States where he faces federal extortion charges in Alabama in connection to the Natalee Holloway case.