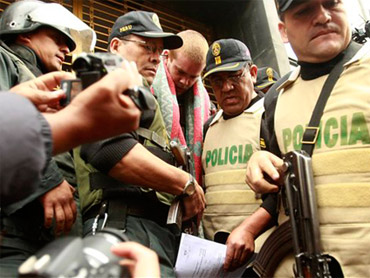 The 22-year-old suspect was first taken with other prisoners in an armored truck on Friday to Lima's judicial palace, then alone to an eastern Lima prison where he will have his own cell in a segregated block.

He described van der Sloot as having acted with "ferocity and great cruelty."

Police say van der Sloot gave a remarkably complete confession in the beating and strangling death of Stephany Flores. But van der Sloot's attorney, Maximo Altez, said Thursday that his client's confession was void on the grounds that he made it in the presence of a defense lawyer who was appointed by police.

The chief of Peru's criminal police, Gen. Cesar Guardia, disagrees, saying that not only was van der Sloot properly represented by his government-appointed defense attorney, but the Dutch translator present during the interrogation was assigned by the Dutch Embassy.

"The incriminatory elements were so powerful that he had to confess," Guardia said, adding that the evidence included blood stains found on van der Sloot's clothing.

According to La Republica, van der Sloot admitted to police that he broke Flores's neck after Flores, without permission, took his laptop and found out he was believed to be involved in the disappearance of Holloway.

If tried and convicted on murder charges, van der Sloot would face from 15 to 35 years in prison.

Van der Sloot has been arrested twice in connection with the disappearance of American Natalee Holloway, who vanished while on vacation in Aruba, but has never been charged. He is also facing extortion and wire fraud charges in Alabama stemming from an alleged plot to reveal information regarding the location of Natalee Holloway's body in exchange for $250,000.