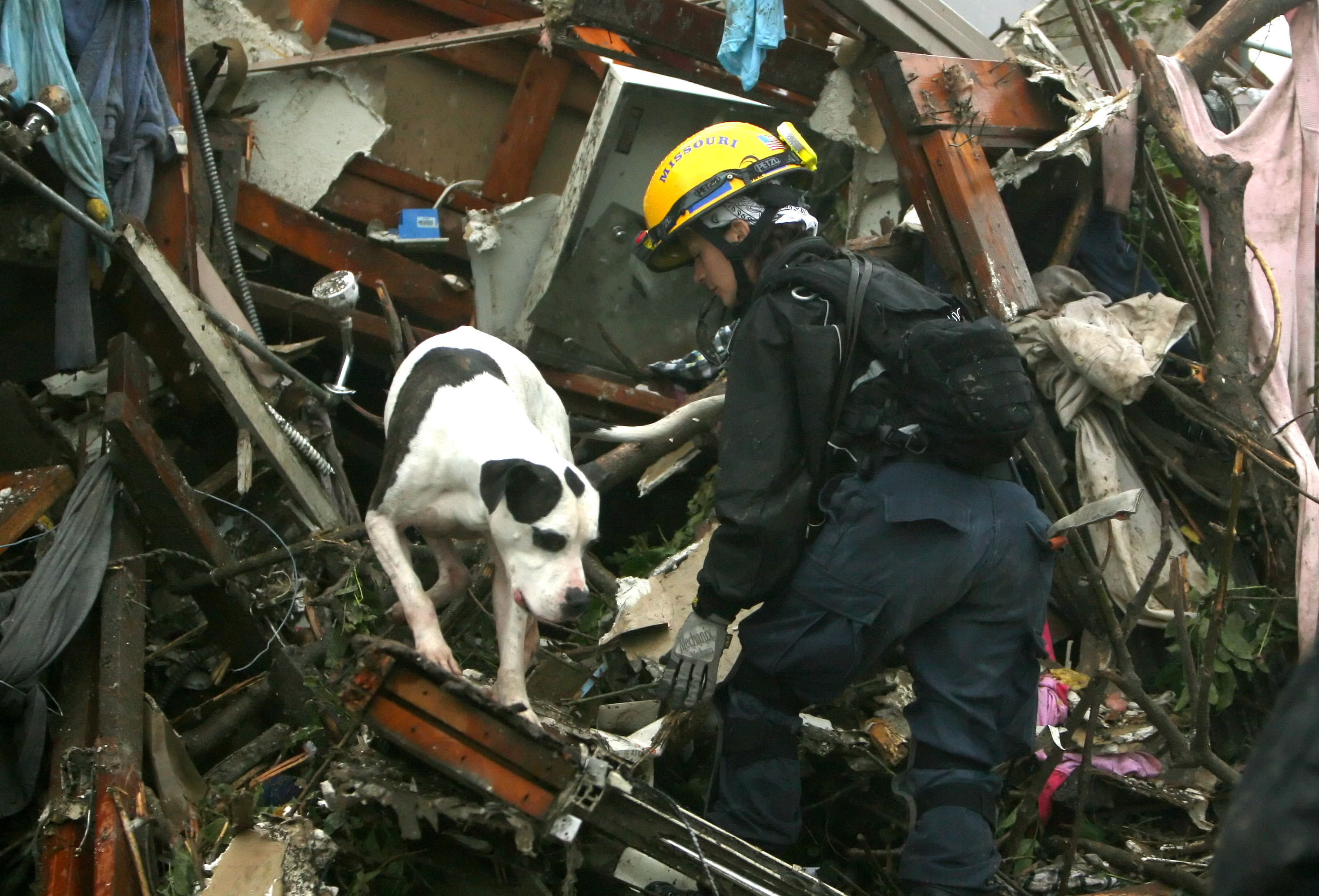 JOPLIN, Mo. - A tornado that killed 117 people in Missouri was the single deadliest twister in the past 60 years, according to National Weather Service.

Until this week, the single deadliest tornado on record with the National Weather Service in the past six decades was a twister that killed 116 people in Flint, Mich., in 1953.

The governor told Chris Wragge, co-anchor of CBS' "The Early Show," Tuesday morning that, weather permitting, rescue crews hoped to have combed over "every foot of this town" by 2 p.m. local time (3 p.m. Eastern).

Pictures: Joplin, Mo., devastated by tornado
Baby, grandma rode out Joplin tornado in closet
How you can help

Nixon said he did not want to guess how high the death toll would eventually climb. But he said: "Clearly, it's on its way up."

There were glimmers of hope. CBS News correspondent Cynthia Bowers reports that at least 17 people have been pulled from the twisted rubble alive. Officials say, however, at least 130 are still unaccounted for.

The weather service's records show more deaths have resulted from outbreaks of multiple tornadoes. On April 27, a pack of twisters roared across six Southern states, killing 314 people, more than two-thirds of them in Alabama. That was the single deadliest day for tornadoes since the National Weather Service began keeping such records in 1950.

The agency has done research that shows deadlier outbreaks before 1950. It says the single deadliest day that it is aware of was March 18, 1925, when tornadoes killed 747 people.

Sunday's killer tornado ripped through the heart of Joplin, a blue-collar southwest Missouri city of 50,000 people, slamming straight into St. John's Regional Medical Center. The hospital confirmed that five of the dead were patients — all of them in critical condition before the tornado hit. A hospital visitor also was killed.

The tornado destroyed possibly "thousands" of homes, Fire Chief Mitch Randles told AP. It leveled hundreds of businesses, including massive ones such as Home Depot and Walmart.

Speaking from London, President Obama said he would travel to Missouri on Sunday to meet with people whose lives have been turned upside down by the twister. He vowed to make all federal resources available for efforts to recover and rebuild.

"The American people are by your side," Mr. Obama said. "We're going to stay there until every home is repaired, until every neighborhood is rebuilt, until every business is back on its feet."

Craig Fugate, director of the Federal Emergency Management Agency, told NBC's "Today" show Tuesday that Mr. Obama has declared a disaster in the area, which means residents are eligible for his agency's assistance.

"We're here for the long haul, not just for the response," Fugate said.

Much of Joplin's landscape has been changed beyond recognition. House after house was reduced to slabs, cars were crushed like soda cans and shaken residents roamed streets in search of missing family members.

The danger was by no means over. Fires from gas leaks burned across city. The smell of ammonia and propane filled the air in some damaged areas. And the forecast looked grim.

The April tornadoes that devastated the South unspooled over a three-day period starting in the Plains. The Storm Prediction Center in Norman, Okla., said a repeat could be setting up, with a possible large tornado outbreak in the Midwest on Tuesday and bad weather potentially reaching the East Coast by Friday.

The Storm Prediction Center also issued a high-risk warning before the deadly outbreak in the South in April.

Heavy rain fell from dark skies all day Monday, finally letting up only as night fell, and lightning was so frequent that it slowed the rescue and recovery effort, Randles said. A police officer from Riverside, Mo., who was helping with the rescues, was burned from a lightning strike and hospitalized. Another officer was slightly injured in a near-lightning strike but kept working.

The rainy, cool weather — the forecast called for an overnight low of 62 degrees — raised concerns about its effect on anyone still trapped in rubble. A whipping wind, perhaps strong enough to finish off homes left barely standing by the tornado, made things more dangerous for searchers and potential survivors.

The twister that hit Joplin was one of more than 50 reported across seven Midwestern states over the weekend. One person was killed in Minneapolis and another in Kansas, but Missouri took the hardest hits.

At the destroyed Walmart, perhaps 200 cars lay crumpled in the parking lot. They were among thousands of shattered vehicles throughout the city, including dozens of tractor-trailers tossed on their sides or tops.

Kim Weathers, 48, looked at her black GMC Envoy and could only shake her head — a piece of the roof from the Walmart had pierced the windows and crushed the side of the SUV.

"We were in the store and all of a sudden somebody yelled, `Get down!' Weathers said. "I could feel the wind coming, then stuff was flying, hitting me in the head. I looked up and it was outside — the roof was gone."

St. John's took a direct hit, leaving debris dangling from the top of the structure and blowing out almost every window. The city's other hospital, Freeman, was overflowing with patients, and makeshift hospitals and triage areas were set up at several other locations. More than 400 people were treated for injuries, Randles said.

Unlike the multiple storms that killed more than 300 people last month across the South, Joplin was smashed by just one exceptionally powerful tornado. Not since a June 1953 tornado in Flint, Mich., had a single twister been so deadly. That storm also killed 116, according to the National Weather Service.

Nixon did not want to guess how high the death toll in Joplin would eventually climb. But he told AP: "Clearly, it's on its way up."

While many residents had up to 17 minutes of warning, rain and hail may have drowned out warning sirens. Some residents said the sirens are so common in "Tornado Alley" that they pay them little heed.

Nancy Hood, 63, is bedridden after suffering from diabetes and cancer. She said she often ignores warning sirens, but didn't on Sunday, telling her husband to grab their two grandsons, ages 4 and 7, and get to the hallway. The tornado destroyed most of Hood's house — except the bedroom where she remained and the hallway.

As rescuers toiled in the debris made soggy by the latest storm, they moved gingerly around downed power lines, large chunks of jagged metal, and boards with nails sticking out. Fires, gas fumes and unstable buildings also posed threats.

Teams of searchers fanned out in waves across several square miles. The groups went door to door, making quick checks of property that in many places had been stripped to their foundations or had walls collapse. Some condemned homes were spray-painted with a big "X."

National Weather Service Director Jack Hayes said the tornado was given a preliminary label as an EF4 — the second-highest rating assigned to twisters based on the damage they cause.

Hayes said the storm had winds of 190 to 198 mph. At times, it was three-quarters of a mile wide.

The tornado got the attention of those who suffered in the South, including in Tuscaloosa, Ala., at the epicenter of the April storm.

"We're praying for those people," said retired Marine Willie Walker, whose Tuscaloosa home suffered more than $50,000 in damage. "We know what they're going through because we've been there already."

Once the center of a thriving mining industry, Joplin flourished though World War II because of its rich lead and zinc mines. It also gained fame as a stop along Route 66, the storied highway stretching from Chicago to Santa Monica, Calif., before freeways diminished the city's importance.

The community, named for the founder of the area's first Methodist congregation, is now a transportation crossroads and manufacturing hub. It's also the hometown of poet Langston Hughes and "Gunsmoke" actor Dennis Weaver.

City Manager Mark Rohr said the city "will recover and come back stronger than we are today."

Buck Nordyke, 53, planned to stay in his south Joplin home to ride out the rest of the storms, even though he's without power and has some slight roof damage.