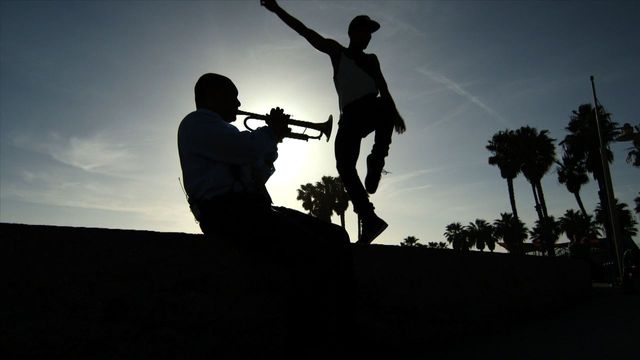 When you think about traditional street performers, you might not imagine them dancing with the legendary New York City Ballet. But one dancer who has done just that.

Jookin' is a Memphis street dance usually performed to rap music, CBS News cultural correspondent Wynton Marsalis explained. But when Charles "Lil Buck" Riley got hold of it, he added a style and grace all his own. And now he's taking that dance form from the streets to the world stage.

When Riley performs, it's as if he's gliding on water, defying gravity. Jookin' is his dance, and he's been called the Baryshnikov of it.

"Jookin' is such a freestyle-based dance that, you know, it's all really influenced by your imagination," Riley said.

Recently "Buck," as he's known, has been wowing audiences across the globe. He's performed with Madonna at the Super Bowl, in Gap ads, music videos and as a member of Cirque du Soleil's Vegas show "Michael Jackson: One."

But his soaring career has very humble roots. He learned to jook on the streets of Memphis where the dance was born. And just five years ago, was entertaining crowds on the streets of Los Angeles to make ends meet.

Riley said, "We didn't want to just be in a dance studio with, like, a bunch of mirrors and stuff like that. We really loved the whole organic feel of the dance. I believe that's what made it what it was. That's what made people feel it more, because it was really organic, you know?"

Like many dances, jookin' is defined by a few fundamental moves, but it's the improvising that makes it sing.

Asked what it takes to be an innovator, Riley said, "Man, just a vivid imagination, drive, and just passion for what you do. Because when you have all those, you're just driven to make up new things."

It's that imagination and drive that separated Riley from other dancers early on. In high school, a dedicated teacher encouraged him to take ballet classes to gain strength and form. It was there that she issued him a jookin' challenge.

Riley said, "And she was like, 'I want you to try something, Buck. Just -- I want you to just do what you do, but just try it to this music.' And she put in this CD and it was 'The Swan'."

A few hours later he improvised a performance to French composer Camille Saint-Saens' "The Swan."

"It just got an amazing reaction from the kids that were there," Riley said. "Like, the kids -- all you hear was, 'Wow, ooh'."

Riley recalled, "He just opened up his cello case and just got to work. No other words said, and I just -- it just came out right there. Like, in that moment, we just made magic happen."

Unbeknownst to either of them, famed director Spike Jonze was there. He recorded the collaboration on his phone. He posted the video online. It went viral and everything changed.

"It was great," Riley said. "Everything was fast-paced though my career just sped up. I was always busy."

Through it all, he's challenged the perceptions and stereotypes of the hip-hop street dance. He's performed his iconic "Swan" routine everywhere, from Beijing to Colorado, where he was the artist in residence at the Vail International Dance Festival.

"I don't just necessarily limit myself to a certain genre of music either," Riley said. "Music can be, like -- a limitation. Like, a lot of people just dance to rap music in Memphis. I'm influenced by all sounds -- period."

And this month, he took the Memphis street dance to the pinnacle of the art when he made his Lincoln Center debut with the fabled New York City Ballet. Just one more step in his unfolding plan.

Riley said, "I thought the dance style was so beautiful that it deserves to be in a category like ballet and jazz and modern."

On point and in full swing, "Lil Buck" continues to make waves throughout the dance community, and luckily for the rest of us, Marsalis added, he has no intentions of stepping down anytime soon.