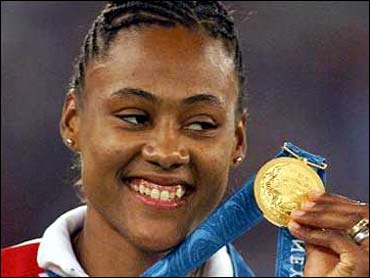 Olympic track star Marion Jones has filed a defamation lawsuit against Victor Conte and challenged the BALCO head to take a lie detector test regarding his accusations that she used performance-enhancing drugs.

Jones is seeking $25 million in the suit filed Wednesday in U.S. District Court in San Francisco, alleging Conte tarnished her reputation when he made the statement broadcast Dec. 3 on ABC's "20/20."

Conte and three others connected to the Bay Area Laboratory Co-Operative were indicted in February by a federal grand jury for a variety of alleged offenses, including illegally distributing steroids.

Jones was one of the first big names linked to the investigation of BALCO, Conte's sports nutrition company, reports CBS News Correspondent John Blackstone. Now several prominent athletes including the New York Yankees' Jason Giambi have now admitted they did get steroids from BALCO.

The suit said Jones passed a lie detector test and includes a statement from her doctor saying she never used steroids. Jones won three gold medals and two bronzes during the 2000 Olympics.

Conte's statements, the suit said, "are false and malicious."

In an e-mail to The Associated Press, Conte said the lawsuit was "nothing more than a PR stunt by a desperate woman, who has regularly used drugs throughout her career. I look forward with all confidence to the court proceedings as I stand by everything I said on the '20/20' special."

Jones' attorneys offered Thursday to pay for Conte to take a lie-detector test and wants three questions asked of him:

The federal charges include distributing steroids, possession of human growth hormone, money laundering and misbranding drugs with intent to defraud. All have pleaded not guilty.

Conte told ABC: "I think she made her decision, and she's going to have to be accountable to the consequences of her decision. If she said she didn't use drugs, then she lied."

Jones' lawsuit says she has passed 160 drug tests, including five at the 2000 Olympics, and "has never taken banned performance-enhancing drugs."

It claims that Conte's motive to concede steroid distribution ahead of his criminal prosecution "appears motivated by a desire to curry favor with prosecutors, garner sensationalized media attention, bolster Conte's own financial and other self interests and harm an individual against whom Conte has a long-standing grudge."

"There exists no one who can truthfully testify that I have ever used performance-enhancing drugs, simply for the reason that I never have," she declared in June. "I have never ever failed a drug test."

The five attorneys representing Jones in the lawsuit wrote that Conte "seeks to take full credit for all of her past successes, falsely asserting that Jones' five Olympic medals in 2000 were the product of his illegal drug regimen instead of Jones' true talent."

Jones failed to win any medals last summer in the Athens Olympics. She has been under investigation for months by the U.S. Anti-Doping Agency, which has said it will take Conte's allegations into account.

The founder of Burlingame-based BALCO, Conte said he worked with Jones from August 2000 to September 2001. He said he designed a doping regimen for her that included the previously undetectable steroid THG, the endurance-enhancing hormone EPO, human growth hormone and insulin.

Following Conte's comments, the International Olympic Committee opened an investigation into the allegations. World Anti-Doping Agency chief Dick Pound, a senior IOC member, has said Jones should be stripped of her medals if Conte is telling the truth.

In the lawsuit, one of the track star's doctors said she never exhibited the physical signs of an athlete taking banned substances.

None of the numerous blood and urine tests performed on her registered positive for illegal drugs, nor were there were any "physical changes or abnormalities that caused me to suspect that Ms. Jones was using any type of illegal performance enhancing drugs," said Richard T. Ferro, a North Carolina sports medicine specialist.

"It is my opinion that these responses are not indicative of deception," former agent Ronald Homer wrote in the lawsuit.