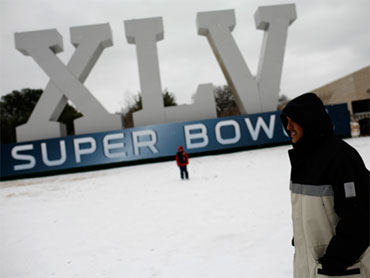 FORT WORTH, Texas - A frigid Super Bowl week in Texas is now turning a little dark, although not at the site of the big game.

One of the state's largest utility providers said rolling statewide electrical outages that started Wednesday in response to high demand from a rare ice storm will not affect Cowboys Stadium in suburban Arlington. But Oncor spokeswoman Jeamy Molina said other Super Bowl facilities, such as team hotels, were not exempt.

Oncor, which serves 7 million customers in Texas, said the planned outages would happen in 15-minute intervals. NFL spokesman Brian McCarthy said some hotels have experienced "brief but expected" blackouts without any problems. A hotel spokesman said both team hotels are equipped with backup generators that would make any outage brief.

The Green Bay Packers and Pittsburgh Steelers moved practices indoors Wednesday. Green Bay was scheduled to practice outdoors at SMU but instead is shifting to a Dallas-area high school that has an enclosed facility. Pittsburgh will practice inside at TCU in Fort Worth.

Cowboys owner Jerry Jones and other NFL officials spent Tuesday defending the region from questions of whether the area would get another shot at a Super Bowl after temperatures plunged into the teens with subzero wind chill readings and a blanket of ice that closed schools, snarled traffic and canceled a handful of Super Bowl activities.

"This is football country. It runs deep. It runs through men and women," Jones said. "It's a big deal. That's the way it is here - period. All that should help us if we have ambitions of hosting future Super Bowls."

Super Bowl media day went on as planned Tuesday under the retractable roof of Jones' $1.3 billion showplace, despite a few complaints from the Pittsburgh Steelers and Green Bay Packers.

The Super Bowl next year is slated for Indianapolis and in 2014 at the open-air New Meadowlands Stadium in New Jersey, again raising the possibility of more chilly stories in the week before the game.

Atlanta has twice been turned down in Super Bowl balloting since a rare ice storm struck the city just before the 2000 game. But Jones and Dallas bid leader Bill Lively shrugged off the notion that the icy weather would affect future Super Bowl bids for the 100,000-seat stadium.

NFL vice president of events Frank Supovitz said he didn't think the storm was fodder for those who contend Super Bowls should be played only in warm weather. He noted that media day went off smoothly.

"Here, we had a contingency plan for frozen precipitation," he said, "because ice is the thing that you have to be most concerned about."

Michael Morris, director of transportation for the North Central Texas Council of Governments, said sand truck crews gave the "bad storm" everything they had to keep roads clear.

"I don't think the question is, we will never have a Super Bowl again in a town that has bad weather or the potential for bad weather," Morris said. "They want to showcase the investment they've made in their stadiums. I think the judgment will be, how was our response? And I'm proud of our response."

Still, the deep freeze was a jolt to everyone. Downtown Fort Worth was virtually deserted, as were most ice-covered roads across the area, and hundreds of flights were canceled at the Dallas-Fort Worth airport Tuesday.

The North Texas climate can be moderate - highs were in the mid-70s just days ago - but the area left no doubt about its wintry side. The National Weather Service says it won't be above freezing until Friday, and Sunday's forecast calls for highs in the mid-50s.

Former Dallas quarterback Troy Aikman, vice chairman of the host committee, was disappointed by the unusual weather, and he blamed the board's chairman - fellow ex-Cowboy Roger Staubach, who is credited with coining the football term "Hail Mary."

"That's Staubach's fault," Aikman joked. "He's the one with the direct line to the man upstairs - at least that's what I've been hearing all these years."

Muhammad Ali died as he lived, surrounded by people who loved him. But this time it was only close friends and family. Carter Evans reports on the three-time heavyweight champion's last days.
Thanks for reading CBS NEWS.
Create your free account or log in
for more features.
View CBS News In
CBS News App Open
Chrome Safari Continue
Be the first to know
Get browser notifications for breaking news, live events, and exclusive reporting.