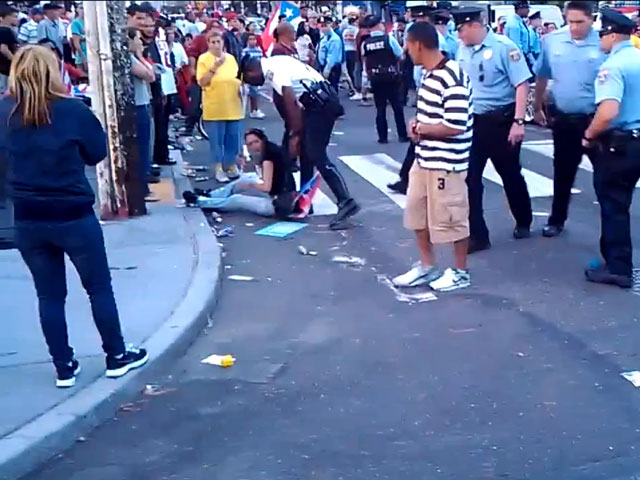 (CBS) PHILADELPHIA - Jonathan Josey, a Philadelphia police lieutenant who was fired after a video of him slapping a woman to the ground went viral, is getting his job back, CBS Philly reports.

Josey was found not guilty in February of simple assault when he struck Aida Guzman, 39, in the face following last summer's Puerto Rican Day parade. He had lost his job in the wake of the uproar over the incident that was videotaped by a bystander.

Following the not guilty verdict, Josey had said he was looking to get his job back. He said he never intended to hit Guzman and that he thought the judge's decision was fair.

Fortunato Perri Jr., Josey's attorney, says both he and his client are thrilled that Josey has regained his position on the force.

"We feel as though it is the correct decision, we felt all along that Lt. Josey should not have lost his job as a result of this incident. He is looking forward to getting back to work and to protect and serve the people and citizens of Philadelphia," Perri told the station.

Philadelphia Police Commissioner Charles Ramsey reportedly says he has no regrets about the actions he took at the time the accusations against Josey surfaced.

Josey will return to the force effective immediately, the station reports.

During his trial, Josey testified Guzman refused to drop a bottle of beer she had been holding. He said that he went to knock the bottle from her hand and was "shocked" to see her go down when his hand hit her face. She was originally charged with disorderly conduct but the charges were later dropped.

Judge Patrick Dugan admitted he was "troubled" by the video of the incident, but says there was more going on than was revealed in the video - describing the scene as "chaos" and "volatile."