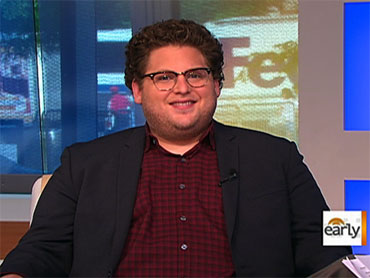 "Well, the story line is interesting because it's a love triangle of sorts in a very odd way," explained Hill, "But basically someone starts dating my mom who is played by Marisa Tomei and John C. Reilly starts dating her. Our relationship is first of all close and it's difficult for him to make his way this there, which could be the premise of a very broad comedy, but the way they've decided to make it is very grounded, and real, and it's got sort of this great comedic and traumatic tone to it."

Hill goes into depth about his character Cyrus, who has always been very close to his mother and has never really gotten to go out into the world and make other friends. When Cyrus's mother begins to date, tension arises because Cyrus feels that his mother's affection is being taken away from him.

"So they're almost in a weird marriage type of thing where they live together and they're best friends and they hang out all the time," said Hill, "And they have a special relationship because they're so close, but when another guy tries to take her affection away, what would do you to defend what you care about most."

Hill has been a part of many comedic films and is very glad to have the chance to stretch the boundaries with this new role.

"I'm just appreciative to be in movies in the first place. I know it's very much a privilege and not a right for anybody," said Hill, "... And it sounds cheesy, but in a lot of ways like life, where no conversation is like just funny or just sad. It's just however it goes. And the movie allows it is to feel like real life."

Hill has not done a lot of press for "Cyrus" because he has been busy promoting his new film "Get Him to the Greek," which recently hit the box office on June 4.