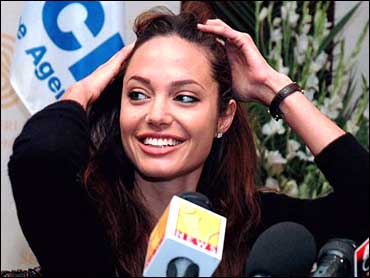 Angelina Jolie and her "Mr. & Mrs. Smith" co-star Brad Pitt are in Ethiopia to pick up the orphaned baby girl she is adopting, an official said Thursday.

Pitt, Jolie and Jolie's 3-year-old son Maddox arrived Wednesday. The couple have refused to speak to The Associated Press about the adoption.

Tesfeye Berhu, manager of the Wide Horizons agency, which arranged the adoption, said the exact cause of death of the baby's parents isn't clear, but he suspects they died of AIDS, which has killed more than 900,000 people in Ethiopia.

The twice-divorced Jolie has often talked of adopting a second child. The 30-year-old actress has told People that she and Maddox, whom she adopted in Cambodia, are "very happy to have a new addition to our family."

Pitt, 41, and his wife, Jennifer Aniston, announced their separation in January. Aniston filed for divorce in March, citing irreconcilable differences. Pitt has denied Jolie is the reason for the split and Jolie has said she's never had sex with Pitt.

Ethiopia, a country of 70 million, has more than 5 million orphans, their parents lost to famine, disease, war and AIDS.

In 2003, a record 1,400 children were adopted from abroad, more than double the number in the previous year. The number of private adoption agencies in Addis Ababa, the capital, has doubled in the past year to 30.

Ethiopia has strict laws to thwart dubious adoption agents and fraudulent paperwork. Agencies charge adoption fees of about $20,000 per child.