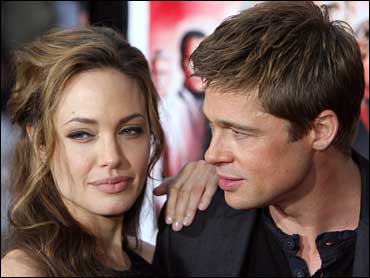 Family-life in the Jolie-Pitt household is a challenge. So much so that the actress says she and Pitt plan to stop working in a few years to give their undivided attention to their brood — Maddox, 5, Pax, 3, Zahara, 2 and Shiloh, 1.

"Brad and I have a lot of kids, and we want to have more kids," she says in the new issue of Parade magazine. "And they demand a lot of time. It takes a lot just to get all of them fed and clothed and out the door to different schools on time. It's fun, and we love it. But you can't balance everything. I think both of us only plan to work for a few more years. We'll try to just stop sooner or later, so we can be home and travel, and just live."

The mother of four says she aspires to be like her own mother, Marcheline Bertrand, who she lost to ovarian cancer in January.

Bertrand was just 56 when she passed away earlier this year and her daughter describes her as a "pure" and "gracious" woman.

"This was somebody who the world didn't know about at all, but her simple acts of kindness left a huge impression," Jolie says. "I still get letters from people who work in a dentist's office who will tell me something she did for their daughter — or something she remembered that just stunned them, because it was so out of the blue and thoughtful."

Jolie says that in her early 20s — flashback to her failed marriage to actor Billy Bob Thornton and red carpet make-outs in full view of cameras — she may have been living a life of unimportance.

"I think that when I was in my early 20s, I knew, innately, that I wasn't living an important life," she says. "I think that I didn't so much lose my way, but I hadn't found my way. I wasn't giving very much. My life was not really benefiting anyone. That just doesn't feel good."

Now she recognizes that she can use her celebrity to impact the world. "There's a part of me that understands that I can get people to pay attention to certain things," she says. "When that happens, there's nothing that feels better. But my intention was never, 'I need to go out there and teach other people something.' "

In fact, she says, that with all these trips she takes to far away countries, she is constantly learning. "I feel like I am getting such a great education," she says. "Whether people's thoughts about my family are positive or negative, at the end of the day, I get to come home to these four little people who are the greatest things in the world."