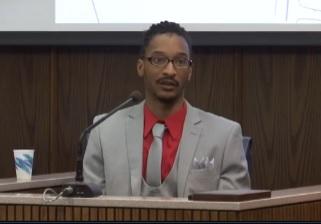 CHATTANOOGA, Tenn. -- A former Tennessee school bus driver was found guilty Thursday of six counts of criminally negligent homicide in a wreck that killed six children. A Hamilton County Criminal Court jury convicted Johnthony Walker of lesser charges in the Nov. 21, 2016, crash in Chattanooga. He had been charged with vehicular homicide.

He also was convicted of 11 counts of reckless aggravated assault and seven counts of assault, the Chattanooga Time Free Press reported. He also was found guilty of reckless endangerment, reckless driving and using his phone.

On April 24, the defense will have the opportunity to present witnesses to argue for a lesser sentence, CBS affiliate WDEF-TV reports.

Jurors began deliberating Wednesday and continued Thursday morning before reaching their verdicts in the afternoon.

Walker was driving 37 children from Woodmere Elementary School when the wreck occurred on a winding Chattanooga road.

Prosecutor Crystle Carrion said Tuesday in court that Walker was driving 50 mph on the narrow road when the bus ran off the pavement, hit a pole and flipped into a tree.

She said Walker was driving too fast to navigate a tight curve safely and drifted into the oncoming lane, then overcorrected, leading to the crash.

Walker took the stand Wednesday and said he wasn't on his cellphone when the bus crashed. He also said he was traveling 35 mph when he approached a curve, and another vehicle dipped into his lane.

Defense attorney Amanda Dunn said police made assumptions and came to their conclusions before getting all the facts in the case.

Jasmine Mateen, whose daughter died in the crash, told CBS News in 2016 that one of her two children who survived the crash told her that Walker asked the children if they were ready to die just before the crash.

"My daughter said right before the bus flipped that he was speeding around the curve and asked them 'Are y'all ready to die,'"Jasmine Mateen told CBS News correspondent Mark Strassmann. Mateen's 6-year-old daughter was killed.