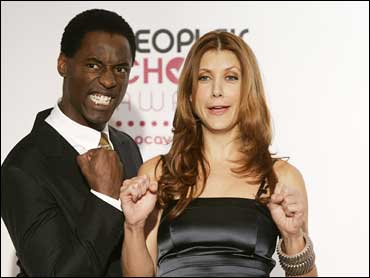 Only in Hollywood! When the 2007 People's Choice Award nominees were announced, presenters Neil Patrick Harris and Isaiah Washington got more attention than the nominees list, but they both stuck to their scripts.

Neil Patrick Harris didn't say a word about last week's revelation that he's gay. When the announcement was finished, Harris made a fast exit, leaving a dozen or so reporters who'd been hoping for interviews.

Also making a speedy exit was Isaiah Washington. He, too, announced some of the nominations but left before talking with reporters. This was one of his first public appearances since he was involved in a fight on the set of "Grey's Anatomy" a few weeks ago.

2Internet research firm Knowledge Networks called on pop culture fans to help determine the nominees. The show will be broadcast on CBS from the Shrine Auditorium on Jan. 9, 2007.

A second round of nominees for categories that include favorite movie, new TV comedy and remake of a song will be announced later.

Country song: "Before He Cheats," Carrie Underwood; "What
Hurts the Most," Rascal Flatts; "When the Stars Go Blue," Tim
McGraw

You can help choose the winners online at www.pcavote.com.