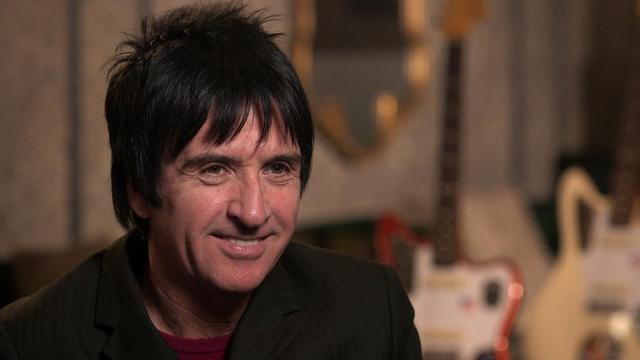 Fans of 1980’s music will recognize the iconic sound of The Smiths, the band that helped create indie rock.

Marr is one of the most highly regarded guitarists in music today, but legions of fans still won’t forgive him for breaking up The Smiths, which he formed when he was just 18.

But in his new autobiography, “Set the Boy Free,” Marr explains why he needed to walk away, and how that band is only a small part of his life and resume, CBS News correspondent Anthony Mason.

As a guitarist, Marr has played with Paul McCartney, the Talking Heads and Beck, and now fronts his own band. But he’s still best known for his short five years with The Smiths.

He formed the group in Manchester, England in 1982, with lead singer Steven Morrissey.

“What did you have in common?” Mason asked Marr, speaking with the musician at a bar called “The Rickey” at Dream Hotel in New York City.

“We had desperation, we had in common,” Marr said. “A lot of desperation.”

Their success in Britain – 18 chart hits – was never equaled here. But many consider The Smiths – with Marr’s jangly guitar and Morrissey’s brooding vocals – the most influential British band of the ‘80s.

“It might not be everybody’s cup of tea, The Smiths – which I understand, and I’m actually okay with. It was unique and it was well played,” Marr said.

“Why do you say you’re okay with it not being some people’s cup of tea?” Mason asked.

“Because then you just turn into one of those kind of vanilla bands then,” Marr said.

“And you don’t want to be vanilla?” Mason asked.

“Not really, no. It’s nice to be one of the bands that polarize opinion. You know, all my favorite bands, you kind of love them or hate them, you know,” Marr said.

But by 1986, Marr began to hate the drama in his own band. He was drinking heavily. Then came the crash, literally.

“I got out of the car and had to check that I was alive,” Marr said.

“Did it clear your head in some way?” Mason asked.

”The car crash cleared my head massively yeah, because before that, you know, I was staying up late, I was drinking too much, I was doing drugs,” Marr said. “But it was a real wake-up call, 100 percent, yeah.”

A year later, he quit The Smiths and the group disbanded.

“Was that painful?” Mason asked.

“Yeah, it was really painful. It was super painful,” Marr said.

But Marr moved on, playing with the Pretenders, The The with the New Order’s Bernard Sumner in electronics.

“I got to get partners who were really strong mentally,” Marr said. “And had a strong enough sense of themselves to deal with the fact that they were harboring a Smith, which was…”

“… in the British music press was tantamount to treason,” Marr said, finishing his thought.

Marr scored his first number one album in America in 2007 when he joined the band, Modest Mouse. But fans still root for a reunion of The Smiths.

“What fans get surprised at sometimes is they assume you’ve been offered gazillions of dollars to get back together, and they can’t believe you won’t take it,” Mason said.

“We have been offered gazillions of dollars to get back together,” Marr said.

And they nearly did. Marr writes in his book that he reunited with Morrissey at a pub in 2008, and then “suddenly we were talking about... the band re-reforming.” But after a few days, there was “radio silence.”

“For a lot of fans that will sound tantalizingly close,” Mason said.

“Yeah. To be honest I was just enjoying having a kind of catch up with someone I used to be really close with 30 years ago. A long time,” Marr said.

“So you don’t think it’s going to happen?” Mason asked.

Johnny Marr may has jumped between bands throughout his career, but one thing has remained constant – his partnership with his wife, Angie. The two have been together since he was 15.

“Says something about you, too,” Mason said.