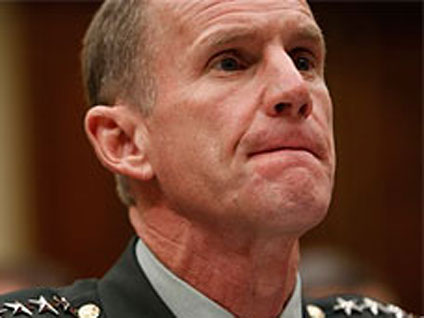 Maybe John Yoo is better at law than he is at history.

Yoo, a former deputy assistant attorney general in the Justice Department, is perhaps most familiar to the public for the legal opinion the Bush administration used  to rationalize the harsh interrogation of suspected terrorists.

Since returning to the private sector - he currently teaches law at the University of California, Berkeley - Yoo has made the rounds of the lecture circuit to pump a new book and counter critics who have accused him of twisting the U.S. Constitution to justify torture.

After the Obama administration released seven more secret opinions written entirely by Yoo (or in conjunction with fellow Bush lawyer Jay Bybee, now a federal judge on the United States Court of Appeals for the Ninth Circuit)  Yoo was eviscerated by scholars and journalists.

Some of the best  included Gary Kamiya in Slate and with David Cole's more in-depth piece in the New York Review of Books. After that sort of public shellacking I assumed Yoo would be refrain from stoking the partisan embers for a while.

Last week, Yoo added his two cents to the commentary-fest surrounding President Obama's move to fire General Stanley McChrystal. Interestingly enough, Obama's move to replace the commander of U.S. forces in Afghanistan with David Petraeus has been remarkably free of the sour bickering that attends most issues of import in contemporary Washington. But not here. Writing in the Wall Street Journal, Yoo found a way to pin this one on Congressional Democrats.

The gist of his argument is that opponents of the Bush administration's foreign policy ironically fostered the conditions which ultimately led to the McChrystal. In Yoo's rereading, the president's current "partisan allies in Congress" worked to undermine the Iraq war and the subsequent war on terror and wound up stirring resentment within the military. Not exactly a Seven Days in May kind of scenario, but close enough. Here's Yoo:

Congressional Democrats spent the Bush years undermining this fundamental principle of constitutional government. True, civilian-military relations had already been on the wane. Generals overtly fought President Bill Clinton's effort to integrate gays in the military. Colin Powell, as chairman of the Joint Chiefs of Staff, published a 1992 editorial opposing intervention in Bosnia. Other military officers successfully resisted a large intervention in Haiti in 1994 to stop human rights abuses and blamed civilian leaders for the humiliating 1994 withdrawal from Somalia after the deaths of 18 American soldiers.

Military resistance reached a crescendo under President George W. Bush. Fueled by Democrats eager to add kindling, generals openly feuded with Defense Department officials over the number of troops needed for the invasion and occupation of Iraq. In 2006, in what has come to be known in the American military as the "revolt of the generals," dozens of senior retired officers publicly called for the resignation of Secretary of Defense Donald Rumsfeld. Military lawyers publicly opposed the administration over the use of military commissions to try al Qaeda leaders and whether the Geneva Conventions governed counterterrorism operations.

Liberals in the media and Congress eagerly joined the chorus for Mr. Rumsfeld's head. They manipulated the generals' revolt to support their opposition to the administration's Iraq and terrorism policies. They undermined the president's ability to receive forthright, confidential military advice. Presidents won't trust generals who may run to Congress or the press at the first sign of disagreement with the military's consensus advice. They traded short-term political gains against Mr. Bush for the Constitution's promise of long-term political stability.

Like Seven Days in May, that makes for a good fictional story line but it doesn't square with what happened.

Fact is that the mistrust dates back to the U.S. defeat in Vietnam, a searing experience which left the military understandably wary about getting ordered into another quagmire. For the generals who opposed the policies of the Rumsfeld-led Pentagon, this was just a case of deja vu.

In the spring of 2006, a couple of retired senior Army generals, who served in Iraq and previously voted Republican, Maj. Gen. John Batiste and Maj. Gen. Paul Eaton, called for Bush to fire Rumsfeld. That was the beginning of a groundswell of discontent within the armed forces with the way the civilians in the Bush White House were running the show. A poll published by Military Times at the end of that year found that only 35 percent of servicemen approved of the way the White House was running the war. Michael Desch, whose excellent 2007 article in Foreign Affairs, explains this in more detail, details how the "administration's meddling and disregard for military expertise" brought this low-grade tension to the surface.

Yoo apparently believes that all this was the handicraft of Congressional Democrats, an extraordinary statement considering the extent of political bumbling that prevails on the other side of the political aisle. Then again, Yoo is a true believer, one who has no regrets about writing his memos for the Bush White House. In a Q&A late last year, he told the The New York Times that he "had to write them. It was my job. As a lawyer, I had a client. The client needed a legal question answered."

In other words, just following orders.

Where have we heard that one before?