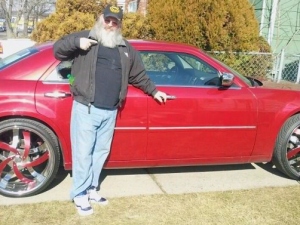 (CBS/WWJ) DETROIT - A Vietnam War veteran and Purple Heart recipient, John Villneff, was shot and killed while protecting his grandchildren from thieves who broke into their house late Wednesday night, CBS Detroit reported.

When he heard noise coming next door, the victim, 62, ran over to protect his grandchildren from the attackers. He was shot in the back, while protecting his granddaughter.

Vanessa Villneff, the victim's daughter, told CBS Detroit that the thieves broke into their house, intending to steal the family's XBOX and Nintendo Wii gaming consoles. The attackers beat her 16-year-old nephew and went for her niece, who was snapping pictures with an iPad.

"They was trying to kill my niece because she took pictures of them, and my dad stepped in the way of the gun and that's why he died, to save his 12-year-old granddaughter,"  Vanessa Villneff told CBS Detroit, breaking into tears.

The boy was hospitalized, but is expected to recover, according to CBS Detroit.

The police are looking at the photographs taken by the girl, but Villneff was certain she knew who the intruders were.

"I fed these boys, I let them use my shower, they spent the night, they played the game, I took them places, I helped them out, I gave them odd jobs to do just so they wouldn't have to steal from nobody," she told CBS .

His daughter described her dad as a family man, as the victim was growing out his white beard, so he could play Santa Claus for his grandchildren during the winter holidays.

An investigation is currently underway to find the suspects.