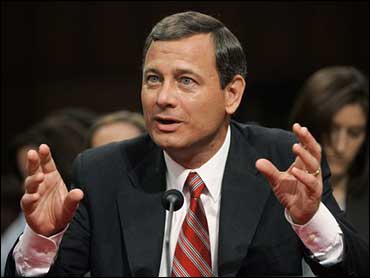 This column was written by Terence Samuel

Well, go on, admit it: It's hard not to like John Roberts.

What's not to like about a smart, surprisingly witty, appropriately modest guy who brings his "A" game to the party? Despite the weird dynamic that developed in the first days of the confirmation hearings in which Republicans practically begged Roberts not to answer questions ("Don't take the bait," urged Senator John Cornyn), Roberts did not come across as especially dodgy or evasive. In fact, he displayed a genius for a kind of Middle American humility, which we have to assume to be manufactured in people as ambitious as Roberts, but charming all the same. And his obvious talents for preparation make you wonder if he should be in charge of the Federal Emergency Management Agency instead of the federal judiciary.

But seriously folks, Roberts' conservatism is obvious, of long-standing, and confirmed by the fact that he is the first Supreme Court nominee of one of the most conservative administration in recent history. So it was incumbent on the liberals on the Senate Judiciary Committee to go after Roberts for what he has had to say in the past about the right to privacy, the importance of the Voting Rights Act, equal pay for women, and the persistence of racial discrimination.

For the most part the Democrats were not comforted by his answers. Liberal lion Ted Kennedy called Roberts' writings "narrow, cramped, and mean-spirited." And when it was Joe Biden's turn, the always-dialectical Delaware Democrat pretty much accused Robert of lying. "His answers are misleading," blurted out Biden, forcing Chairman Arlen Specter to step in. "They may be misleading but they are his answers," Specter decreed.

The confrontation was a study in contrast and a clear illustration of why Democrats have had so much trouble trying to derail the Roberts nomination. Roberts was completely unflappable in the face of Biden's outburst, responding directly, with humor and a mildly sardonic "with respect" thrown in for good measure. "With respect," he said "they are my answers, and, with respect, they are not misleading. They are accurate."

Not all Democrats are thrilled by Roberts. Some conservatives aren't, either. On the first day, Roberts said that there is more than just an implied right to privacy in the Constitution, and that Roe v. Wade was settled law deserving of respect and deference. On the second day, he said that the Supreme Court should hear more death-penalty cases and address more issues in that area.

Roberts did not say that Roe should not be overturned. And after being pushed hard on the question by, of all people, Specter, a notoriously pro-choice Republican, Roberts' answer was as good as you could hope for if you were pro-choice -- and as unsettling as ever if you were a pro-choice activist, hoping Roberts would help overturn Roe v. Wade.

"There is nothing in my personal views, based on faith or other sources, that would prevent me from applying the precedent of the court faithfully," he promised.

That answer prompted Senator Sam Brownback, an avid anti-abortion crusader, to point out that Plessy v. Ferguson , which enshrined "separate but equal" into law, was precedent for 60 years before it was rightly overturned.

The Roberts-Specter abortion discussion may have so unsettled some conservatives that it will not be long before they are both under attack from the right, because clearly, for millions of pro-life voters who were desperate to get George W. Bush elected and re-elected, there is nothing settled about abortion laws in the United States, and that is not what they want to hear from their senators or their judges. What is more, they do think of this nomination as one of theirs, having been responsible for the president's re-election. They cannot be that happy with what he was saying. Unless, of course, he's lying about what he believes to get confirmed, and they know that. Subterfuge and misdirection are common and accepted practices in Washington, often falling into the scope of activities known as lobbying.

"I think you have acquitted yourself as well as anybody in the 10 Supreme Court nominations that I have seen since I've been here," declared Senator Orrin Hatch after Roberts endured anther round of questioning by ranking Democrat Pat Leahy.

The ultraconservative Tom Coburn tried to get Roberts to say when life begins by obversion -- first outlining a definition of death (no heartbeat and no brain function), then trying to get Roberts to agree to the reverse.
"Would you say that that the opposite of being dead is being alive?" he asked.

"Yes," a smiling Roberts conceded, adding, "I don't mean to be overly cautious."

But he was in the way that people in Washington know how to be without seeming timid. He said that he was not a politician. He said he saw himself more like a baseball umpire, calling balls and strikes but not hitting or pitching. Yet John Roberts proved himself to be the ultimate pitchman on his own behalf. And while it is often said that people who represent themselves in courts of law have fools for lawyers, the same does not apply to a good lobbyist representing himself before Congress.