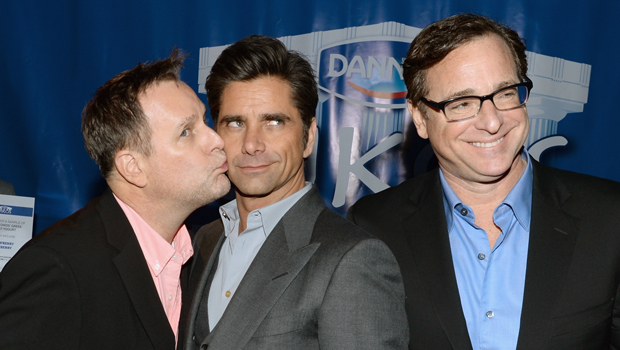 It's been nearly 20 years since "Full House" went off the air, but you'd never know it -- syndication has kept episodes of the classic series and all its memorable characters and catchphrases alive for '90s nostalgics and new viewers alike.

And, according to John Stamos, there may be more where that came from. The actor, who played Jesse Katsopolis on the beloved series, says a reunion could be in the works.

"We're working on something that's sort of reunion-like, not with the full cast," he told CBS News this week. "I can’t tell you too much but it is sort of a reunion type thing with the girls."

But Stamos, 50, stressed that it would have to be the right sort of project to get the gang back together.

"The legacy [of the show] is so important… I don’t want anything to mess what we did up. We'll only do it if it’s something that will augment the show and maybe add a little more happiness to what people get out of it."

There's already been a mini "Full House" reunion of sorts -- Stamos, a spokesman for Dannon Oikos yogurt, got his pals and former co-stars Bob Saget and Dave Coulier to join him for an ad that will air this Sunday during the Super Bowl, and the trio's been making the media rounds to promote it.

"Full House" ran from 1987-1995, and the cast has stayed close in the years since it ended. "There's no other [cast of a show] on the planet that spends as much time with each other as we do," he said. "It's all of us. The twins [Mary-Kate and Ashley Olsen] live in New York so when we’re here we see them, and in LA we’re always together."

But, despite staying in touch, actually working with Saget and Coulier again was "different" -- "because all of a sudden now we’re doing lines and hitting marks and it was a little odd," he laughed.

Looking back at "Full House" now, Stamos said he had no idea the show would have this much staying power, but he has an idea why it's become so beloved. "It's because magic happened back then, for one," he explained. "Two, I think it was a show where the kids didn't talk down to the parents and, again, something magical happened and it's still -- it's more popular now than it was 25 years ago."

Still, he admits, it took him a while to embrace the show's continued popularity, "because I wanted to get enough work under my belt -- Broadway plays and 'ER' and the stuff that I've done. But now I'm happy to talk about it. I’m proud of it."

Potential reunion projects aside, Stamos has a new film coming out this spring called "My Man is a Loser," in which he plays a playboy type who counsels two pals having trouble in their relationships. He also says he might return to the stage again in a year or two, and has fond memories of being part of the "Full House" household.

"It was a party," he said of that time on the set. "We always looked forward to going to work. We would go to work all day, and then we would go to dinner and then Bob and Dave and I used to sometimes drive to work together. We just loved being around each other and we still do. And that's why the show has lasted for so long."