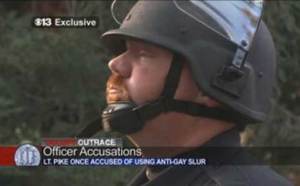 (CBS/AP) DAVIS, Ca. - During an Occupy UC Davis protest in Nov. 2011, students seated arm-in-arm were told to leave. When they refused to do so, some police officers took to pepper-spraying them.

One of the officers accused of pepper-spraying the students, Lt. John Pike, no longer works for the university as of Tuesday, a spokesman told the Sacramento Bee.

Video footage showed Pike, 39, and at least one other officer spraying demonstrators seated on the sidewalk and refusing police orders to disperse.

Pike was immediately put on paid administrative leave, drawing criticism from all over the country, with many also calling for the termination of UC Davis' Chancellor Linda Katehi, according to the CBS Sacramento.

Spokesman Barry Shiller told the Bee that he could not comment on Pike's departure, citing privacy concerns.

Some UC Davis students agreed that Pike's termination was the solution.

"I think he did need to walk away," one student told CBS Sacramento Tuesday night.

"He should have been gone a long time ago," another said.

According to the Bee, then-UC Police Chief Annette Spicuzza retired in April, after an independent investigative report found her leadership severely lacking, along with much of the UC Davis school leadership during the protest.