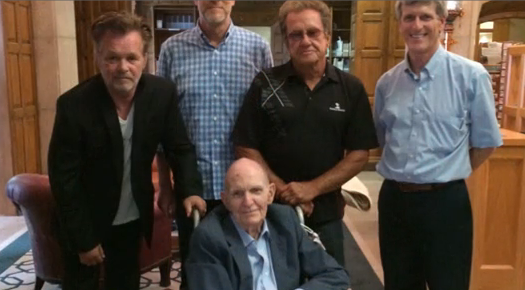 In the early 1950s, most babies born with spina bifida did not live long.

But singer John Mellencamp survived after a pioneering operation.

Last month, after more than 60 years, he finally met the doctor who saved him, reports CBS News correspondent Anthony Mason.

"I didn't even know I had the operation until some kid, I was about nine or 10, said 'what's that big scar on the back of your neck?' and I went home and asked my parents," said Mellencamp. "They said, 'oh, don't worry about it. You had an operation."

"Troubled Man" is the lead single of Mellencamp's new album. His troubles started right at birth.

Last month, at the Riley Hospital for Children in Indianapolis, Mellencamp finally met Dr. Robert Heimburger, now 97, the neurosurgeon who performed the life-saving operation in 1951.

"He remembered it 'cause it was the first one they'd ever done," Mellencamp said.

Spina bifida is a birth defect that causes an opening of the spinal column that can sometimes allow the spinal cord to grow or extend outside of the body.

For most of his life, the singer knew little about the surgery he had as a newborn.

The hospital still has the records of Mellencamp's procedure, including an image of nine-day-old John Mellencamp.

"This is the crown of my head right hear," said Mellencamp pointing at the photo. "That's my ear. That's my neck. So this thing was the size of a man's fist."

This was the first time he saw the growth in the back of his neck.

"And it was just like, why didn't you guys show this to me earlier?" Mellencamp asked. "'Cause I woulda' seen how lucky I am to even be here."

At 62 years old, he said seeing it for the first time was like "finding out your parents weren't your parents."

"I mean it was really an epiphany moment for me," Mellencamp said. "I couldn't thank the guy enough."

Because by rights, he should be dead.

In 1951, John Mellencamp was one of three babies at Riley with spina bifida.

"They did three operations," Mellencamp recalled. "One died on the table. Another girl lived, I think, 'til she was 14, and then she died. And then me."

"They basically cut my head off from here to here, laid it open, cut that thing off then put all the nerves into my spine," Mellencamp said.

And because he was one of the first, the surgery didn't cost much either.

The singer remembered walking down a New York street in the 1980's -- the height of his success -- when he was stopped by an older woman.

"And she said, 'do you know how many angels you have around you?' and I went, 'what?' she goes, 'you are covered with protection,'" Mellencamp said.

Now looking back, he said, he might just believe it.

Mellencamp and the doctor who saved him 62 years ago sat together for about an hour last month.

"Basically we talked about faith, 'cause I have very little faith in anything," Mellencamp said, adding that the doctor "just kept grabbing my hand and saying 'John, you need to have faith.'"

He said he's trying to take his advice to heart.

"Trying to find faith in something," Mellencamp said.

Mellencamp will start an 80-date tour beginning in January.

His final show in Indianapolis next summer will benefit the Riley Children's Foundation, which supports the hospital where he had the surgery as an infant.