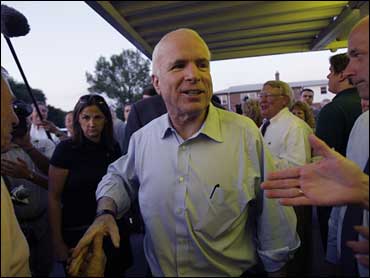 This story was written by By Kenneth P. Vogel.

The Republican reformer is back.

After a primary in which John McCain sought to avoid talking about his fight to reduce the role of money in politics - an issue that put him at odds with many GOP activists - the Arizona senator is once again embracing his campaign finance reform credentials.

It's a central part of McCain's political identity, the genesis of his national profile as a reformer, a fact highlighted by the attacks he endured during the nomination fight over the sweeping 2002 campaign finance overhaul that bears his name. Many Republican activists and small-government conservatives revile the McCain-Feingold reforms as the epitome of big government infringement on free speech, and as a result they remain leery of McCain today.

But the McCain campaign believes that by carrying the reform mantle in the general election, he will appeal to independent voters - and potentially undercut presumptive Democratic nominee Barack Obama's change theme.

The first sign of McCain's return to reform came last month, when his campaign debuted a new slogan - "Reform - Prosperity - Peace" - that nodded to his leadership in the campaign finance movement. It's a slogan that McCain himself coined last month, reportedly in an unscripted moment.

Then came the ad. Last week, McCain began an airing a biographical spot touting his leadership on campaign finance reform foremost among his legislative accomplishments, and he publicly embraced the groups that supported his efforts.

The television ad begins with his military service and his time as a prisoner of war in Vietnam. When he got home and entered Congress, the ad's narrator intones, he put his love of country "before party, polls and self. A maverick. John McCain tackled campaign reform, military reform, spending reform. He took on presidents, partisans and popular opinion."

He followed up in an interview last week with The New York Times, in which he identified reform-minded and activist-oriented former President Teddy Roosevelt as his "major role model … in the 20th century."

When pressed about where, in his own record, he advocated an active government role to accomplish something "in a similar vein" to Roosevelt. McCain had a ready answer.

"Campaign finance reform - obviously he was a great reformer - is one of them," McCain responded, according to a transcript on the Times website. "Climate change is another. He was a great environmentalist."

McCain recently even managed to upstage Barack Obama, whose campaign is powered by his image as an agent of change. Last week, McCain's campaign was the first to agree to volunteer more information about bundlers and small donors in response to a request from eight nonprofit groups that supported McCain-Feingold and other reforms championed by McCain.

"We would like to thank you for your organizations' admirable efforts in promoting transparency and accountability in the election process," McCain's campaign manager, Rick Davis, wrote in a letter to the groups explaining how McCain planned to step up his disclosure. "As you well know, John McCain has been a tireless crusader for campaign finance reform for many years. Our campaign has worked hard to embody Senator McCain's commitment to transparency and accountability in the political process."

Obama's campaign subsequently agreed to match McCain's recent disclosure of bundlers' addresses, but not their employers and occupations - which McCain posted on his website in response to the reform groups' requests.

The McCain campaign rejects the premise that he's repositioning himself on campaign finance issues, insisting that the senator never dstanced himself from McCain-Feingold or his other efforts to tighten campaign rules.

"John McCain was attacked so much for it in the primary - how could he forget?" said Brian Rogers, a spokesman for McCain. He asserted McCain's leadership on the issue would help him with independent voters inspired by the idea of a new politics that transcends partisan divisions.

"John McCain has always emphasized his long record of putting principle over party and politics to do what's right for America," Rogers said. "Campaign finance is a perfect example of this."

Indeed, during the 2000 presidential primaries. McCain and fellow underdog Bill Bradley, a former New Jersey senator who was seeking the Democratic nomination, got surprising traction running on reform-oriented platforms.

Though both lost their respective nomination fights, the idea that special interest cash was corrupting Washington emerged as a prominent theme, which in turn provided momentum for McCain's efforts in the Senate to ban huge, so-called soft money contributions.

Yet this time around, McCain's rhetoric critical of special interests hasn't been nearly as strident or prominent as in 2000, instead taking a back seat to his campaign's focus on national security and the economy.

But in a general election in which polls suggest deep dissatisfaction with the president and Congress - not to mention the government's handling of gas prices, the economy and the war in Iraq - reform rhetoric may resonate with independent and swing voters.

At the same time, there is also a degree of political risk.

Democrats have already filed a complaint with the Federal Election Commission alleging that McCain violated public financing rules in the primary, and they are questioning his commitment to campaign finance reform.

Among the GOP base, it could further upset small government conservatives already queasy about his bona fides, said Kevin Madden, who was the spokesman for former Massachusetts Gov. Mitt Romney's rival GOP presidential campaign.

"There is a risk, but the McCain campaign has calculated that the upside outweighs the downside as far as presenting him as a reformer who does the hard things for what he believes is the good of the country," Madden said.

"This is not a news flash that he supports campaign finance reform," said Bopp, who has won four U.S. Supreme Court cases challenging campaign finance regulations, including one loosening part of McCain-Feingold. "He should emphasize whatever issues he believes will get him into the White House, because I want him in the White House. And it's not because of McCain-Feingold. It's because of other issues."
By Kenneth P. Vogel