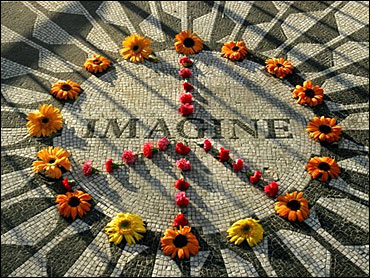 John Lennon's murder 25 years ago Thursday was one of those "where were you" moments.

A true rock icon, the former Beatle remains one of the most influential artists of his generation.

As they did the day Lennon was shot, his fans were gathering Thursday in Strawberry Fields in New York's Central Park to remember the working-class hero.

looked back
at Lennon's life and death.

"My mind was reeling, trying to change it, trying to fix it," Lennon friend and photographer Bob Gruen tells Smith. " 'What can we do about it?' and, you know, just the horror of the way it happened, the pointlessness of how it happened."

Though Lennon was regarded as a musical genius, he saw himself as an ordinary working man, Smith says.

In an appearance captured on "The Dick Cavett Show: John & Yoko" DVD, Lennon says, "I'm not an intellectual, I'm not articulate, I'm working-class, and I use few words. I use the words that people around me used when I was a child. I talk like that."

"Actually, I met them in their bedroom," he tells Smith. "They spent a lot of time in bed. … They weren't kind of a sit-at-the-desk kind of businesspeople. They were more of a give-instructions-from-the-bed kind of people; a very nice bed, a very big, comfortable bed."

Gruen was there the day Lennon and Ono looked at their first apartment in uptown Manhattan, in the luxury apartment building called "The Dakota."

He says of a photo session he did with them at the time: "John and Yoko particularly liked this session. It really shows the kind of communication and the touching and loving between them. It's one of my favorites of the two of 'em."

Gruen was at the Dakota several years later for the birth of Sean Lennon.

"It was probably the happiest I've ever seen him," he says. "You know, a big, you know, new father smile on his face. John Lennon was a very funny guy. And he put people at ease very quickly. And you'd always have a good laugh whenever you saw him."

Lennon's famous quick wit and improvisation came through in interviews with talk show host Dick Cavett, who tells Smith, "(Lennon) said, 'You know, the whole idea that we're thinking of doing this is 'cause you've got the only halfway intelligent show on television.' And I thought, 'Well isn't that … Now, wait a minute. I've worked all these years to be a halfway intelligent show? Do you suppose we'll ever get higher than that, John?' "

Lennon was also a committed political activist. The FBI wanted him deported on drug charges.

"They're after us because we talk about peace, you know," Lennon remarked to Cavett during the joint appearance with Ono.

Lennon's final day, Smith says, was an eerie microcosm of his entire life.

He had just emerged from five years of seclusion with a new album, and began the morning with a photo session for Rolling Stone magazine. Its cover featured a naked Lennon up against a clothed Ono.

"He just wanted to strip himself naked, bare, and say, 'This is just who I am. I'm just a regular guy, called John,' " says Beatles scholar Marin Lewis.

That afternoon, Lennon gave what would be his final interview to disc jockey Dave Sholin, who was working with engineer Ron Hummel, and spoke of Ono, his love and inspiration.

"Certain times during the interview," Sholin says, "he would look at her and she would look at him, and it was pretty clear what they were saying, just with their eyes. … I'm glad we captured everything. I just wish there was another ending."

During that final interview, Lennon said: "I still believe in love, peace. I still believe in positive thinking. … And I consider that my work won't be finished until I'm dead and buried, and I hope that's a long, long time."

The day ended with a recording session, and Lennon rushed home to see his son, Sean.

At The Dakota, Mark David Chapman was waiting.

"He went into a combat stance, and he fired," says now-retired New York City Police Officer Peter Cullen, who had no idea he was about to be called to an assassination scene.

"A call came over," he says, "Report of possible shots fired at The Dakota."

Five shots, Smith says, that silenced a devoted husband and father, and the voice of a generation.

"That's what John Lennon is," Lewis says, "more than a musician. He's like Martin Luther King: a flawed human being who rose above his own flaws to inspire other people. And you can't ask more of a human being than that."

Mourners in New York will hold a moment of silence Thursday night at 10:50, the time Lennon was shot, and again at 11:15, the time he is believed to have died.

The book "John Lennon: The New York Years," with text and images by Gruen, is available from this page at amazon.com.