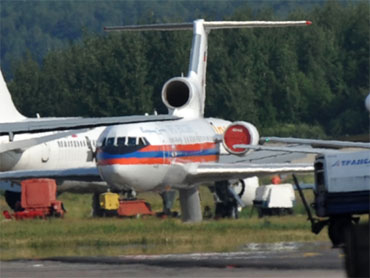 John le Carre, master of the Cold War espionage novel, says he can't comprehend what the 10 Russian spies kicked out of the United States this week thought they were doing.

In a commentary published Saturday in The Guardian newspaper, le Carre writes: "Who did they think they were protecting in their distorted, programmed little minds as they tried and tried again, unsuccessfully, to slither up the slippery pole of western society?"

Referring to the 10 agents who lived under deep cover in American suburbs as "deluded spy-babies," le Carre

Le Carre - the pen name of David Cornwell, author of such classic espionage works as "The Spy Who Came in from the Cold" and "Tinker, Tailor, Soldier, Spy" - says there was a time when spies had motives, and took their place in a great struggle between capitalism and communism.

But now, says le Carre: "What was there to choose between Mother Russia and Mother America, two huge continents out of control drowning together in the oily waters of capitalism?"

Meanwhile, the ten uncovered as sleeper agents in the United States have received a tepid reception upon their arrival in Moscow.

The 10 who pled guilty to acting a foreign agents in the United States, including one Peruvian, weren't publicly visible Saturday, a day after being swapped on the tarmac of the Vienna airport for four Russians convicted of spying for the West.

State-controlled national television channels reported their return concisely, with none of the patriotic fervor that could accompany such a story. The straightforward approach may itself be a sort of spin, reflecting the Kremlin's clear desire for the case to go away for fear that it could undermine efforts to improve relations with Washington.

No national TV channels carried live coverage of the plane's landing Friday, even though it was available from international news agencies.

"A staggering success in the fight against world espionage: Russians exchanged for Russians," the leftist newspaper Sovietskaya Rossiya said in its headline. It also noted sourly that the swap showed "one American agent is equivalent to the worth of two-and-a-half Russian agents."

Moskovsky Komsomolets, one of Russia's most popular newspapers, put the spies below its top story about an octopus and a parakeet predicting World Cup soccer results. Newspaper commentator Alexander Khinshtein fumed that the four sent out from Russia would likely be lauded in the West.

"There will be a scrum around them; everybody will want to shake the hands of the heroes, invite them to lunch and dinner ... the saboteur (Igor) Sutyagin will be embraced by congressmen," he wrote.

The Komsomolskaya Pravda newspaper focused on the fate of two convicted Russian spies sent to the U.K. and buried the arrival of Anna Chapman, Mikhail Semenko and eight others in lower paragraphs.

The online edition of the Gazeta newspaper cited a former KGB agent, Vladimir Rubanov, as saying the latest spies could be drafted to be teachers of future generations of spies, even though they apparently produced little useful information and eventually got caught.

"Mistakes can be learned from," he said.