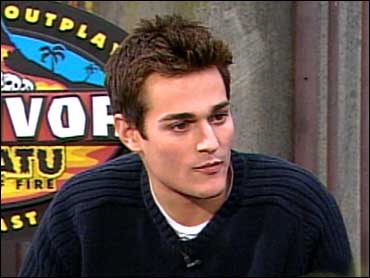 In Thursday night's episode of "Survivor: Vanuatu," the all-male alliance started to shatter like glass under pressure as the men of the Lopevi tribe turned their backs on John Kenney, the pretty-boy mechanical bull operator from Los Angeles. They voted instead to keep their two new women tribe members on board. John, distrusted and pegged for being a slacker while the rest of his tribe labored tenaciously, had to pay his dues at tribal council and say goodbye.

In his "day after" interview on The Early Show, John told co-anchor Rene Syler that he hopes Chris Daugherty wins, because he is playing the game best. He hopes Lea "Sarge" Masters comes in second.

He also said that he knew he was going to be the next to be voted off the island, which is why he was not bending over backwards to help out around the camp.

"I knew I was getting voted out, so it didn't matter how much I napped or ate," he explained. "I needed to win that immunity, is the only way I was staying in the game."

When Syler pointed out that he missed some "pretty critical shots" in the immunity challenge, John's feathers got ruffled. He retorted, "I made most of mine. I mean, everyone else pretty much didn't do very well."

"I saw a couple that you missed," Syler persisted.

"Everybody missed them. It was all right," John shot back.

"No, their team did well," John conceded. "Rory did well. There is reason why I'm here and Rory is not... I thought it went well. I mean, I did as best as I could for the time that I was there. That's all I did."

One of the things that came up Thursday night was how John felt uneasy about Chad being there (Chad is the first "Survivor" player with a prosthesis) because John thought he would get some sympathy votes.

Said Syler, "Richard Hatch had a personality. I mean, a lot of people had personalities."

And John replied, "Right, and it wasn't 'old versus young' in Hatch's tribes. For mine, it was, as soon as Brook was gone, every one of us young guys knew we had no chance in the show."

Syler pointed out that Chad is working pretty hard, adding, "Can we give him some credit?"

John: "Because everybody is working twice as hard."

Syler: "Except for you."

John: "Because I was the next to get voted off."

Syler said that when it came down to Thursday night's vote, it looked like it may have been between John and Julie. But John said the producers just made it look that way, and everyone knew it was going to be John.

Finally, Syler asked, what would John do differently, if he had a chance to do it again.

John's response: "Tell the producers it should have been co-ed, is the one I would have done differently... When you put all guys on the team, it's young guys versus old guys. (On the other hand) an older woman isn't necessarily scared of the young guys."

On Thursday night's show, Rory's desperate attempts to suck up to the all-women Yasur tribe appeared to be paying off in terms of winning challenges. But Rory's place within Yasur is far from solid. While trying to entrench himself deeper, he ran into opposition from the ladies. They told him, essentially, that when the time comes, he will be voted out. Rory made it clear then that the Yasur tribe will "burn" without his muscle behind it.

After winning the reward challenge, Yasur was allowed to treat itself to croissants and coffees of many kinds at a Survivor-style Home Café. The cafe was full of memories from the lives the contestants lived before their time on the island. Inside the cafe, they sipped coffee and looked at pitures of their families and read letters from home.

Soon no eyes were dry. Even tough guy Rory shed his share, looking at pictures of his son. The coffee break allowed members to see each other in a more human, personal light -- but everyone bore in mind that the game was at stake.

Before the immunity challenge, Sarge was filled with confidence. However, contrary to Sarge's machismo assuredness, Yasur won the bust-up bingo game. The tribes had to use slingshots to obliterate ceramic tiles – 20 in all – that corresponded with a series of mats on the ground.

Rory used the muscle he is so fond of showing off to provide a big upset, leading the female alliance to victory. Upon losing, John dropped his head like a naughty dog who knows what's coming as his tribe accepted defeat.

Unaired insider video and a "Survivor" fantasy league are featured on the official "Survivor" Web site.
By William Vitka

Paramedic: Officer Was In "State Of Rage"