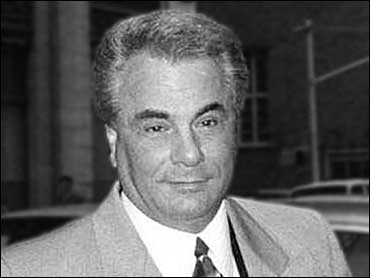 Even mobsters have their brushes with career paths not taken.

Newly released FBI documents show that if he'd selected the military over the Mafia, John Gotti might have served as a grunt instead of a godfather, wearing Army fatigues instead of Armani suits.

But years before emerging as the "Dapper Don," a 23-year-old Gotti ignored a 1963 induction notice from his local draft board. The future Gambino crime family boss whose deeds would decades later land him in a federal prison in Springfield, Mo., turned draft evader on the day that President Kennedy was assassinated in Dallas: Nov. 22, 1963.

The details about Gotti's near-military duty are revealed in nearly 700 pages of FBI documents released to The Associated Press via a Freedom of Information Act request.

Gotti died June 10, 2002, at the federal prison hospital in Springfield, Mo., of head and neck cancer. At the time of his death, he was 61 and had served nine years of a life sentence for racketeering.

The documents just now being released offer glimpses into the once-mighty Gambino family, including the brutal response to an attempted hit on Gotti. And they show how quickly Gotti jumped from street thug to public enemy No. 1 in the FBI's estimation.

Gotti was tracked down on the draft board rap after his 1965 arrest for stealing a car. According to a Jan. 7, 1966, FBI memo, he was interviewed after a November 1965 courtroom appearance.

"Gotti advised he did not realize he was delinquent with his draft board in as much as he is married and has two children," the memo said. "He further advised he felt because of this and the fact he has been previously arrested he was not eligible for the Armed Forces."

Gotti said he was willing to serve, but never did. By May 1966, he was behind bars, in prison garb instead of olive drab.

His public exhibitions of his own style of patriotism never waned, though: The old-school mobster hosted an annual Fourth of July fireworks extravaganza for years in his neighborhood in the Queens section of New York City.

It was around another holiday, Christmas 1985, when Gotti's brazen hit on mob boss "Big Paul" Castellano in midtown Manhattan catapulted him into the Gambinos' top spot. FBI officials were quick to take notice, chronicling Gotti's instant ascent into Castellano's place as head of the nation's most powerful crime family.

By 1987, prosecution of Gotti was the "top investigative priority" of the FBI's New York office, according to a case synopsis sent to FBI headquarters.

Gotti's designation was remarkable, given that the New York office is the FBI's largest and busiest field office, covering cases that could range from terrorism to white collar crime.

It wasn't until 1992, after Gotti beat three other prosecutions, that he was finally convicted of racketeering and jailed for life. Gotti died behind bars of cancer in June 2002.

Gotti's loyal henchmen immediately responded to the gunshot fired at their boss on a quiet street.

"Witnesses observed (Ciccone) being chased down the street by a gang (6-10) of males who were in business suits," the FBI memo said. "The gang caught up to the fleeing male and proceeded to beat him about the head. This male was then dragged into a large black vehicle with tinted windows and driven away."

Ciccone, hands bound behind his back, was shot five times in the head and dumped in a candy store. FBI agents visited Gotti's Queens hangout, the Bergin Hunt and Fish Club, to quiz two men about the shooting.

"Both individuals denied any attempted shooting of Gotti or anyone else in the area," the memo said. The agents spotted Gotti chatting nearby with capo Joe "Piney" Armone.

Many of the FBI papers dealt with Gotti's base of operations, the Ravenite Social Club in Manhattan's Little Italy, home away from home for "all upper echelon members of the Gambino family," one document said.

Although the club was under constant FBI surveillance, Gotti stubbornly stayed put, and it was his misguided allegiance to the Ravenite that eventually brought him down. An FBI bug placed in an apartment above the club generated damning evidence.

The recordings captured Gotti and various underlings freely discussing everything from mob murders to the value of a good tuna fish sandwich.

"Documented results have surpassed every expectation for such a difficult, dangerous and time-consuming project," an April 1990 internal memo said.

Not everybody was thrilled with the Ravenite taping. In November 1990, another memo indicated that Manhattan District Attorney Robert Morgenthau was upset because he wasn't clued in about the FBI's electronic surveillance of Gotti.

"NY FBI afforded this investigation the proper degree of secrecy," another memo said. "... The conduct of NY FBI .... could only be viewed as proper and professional."