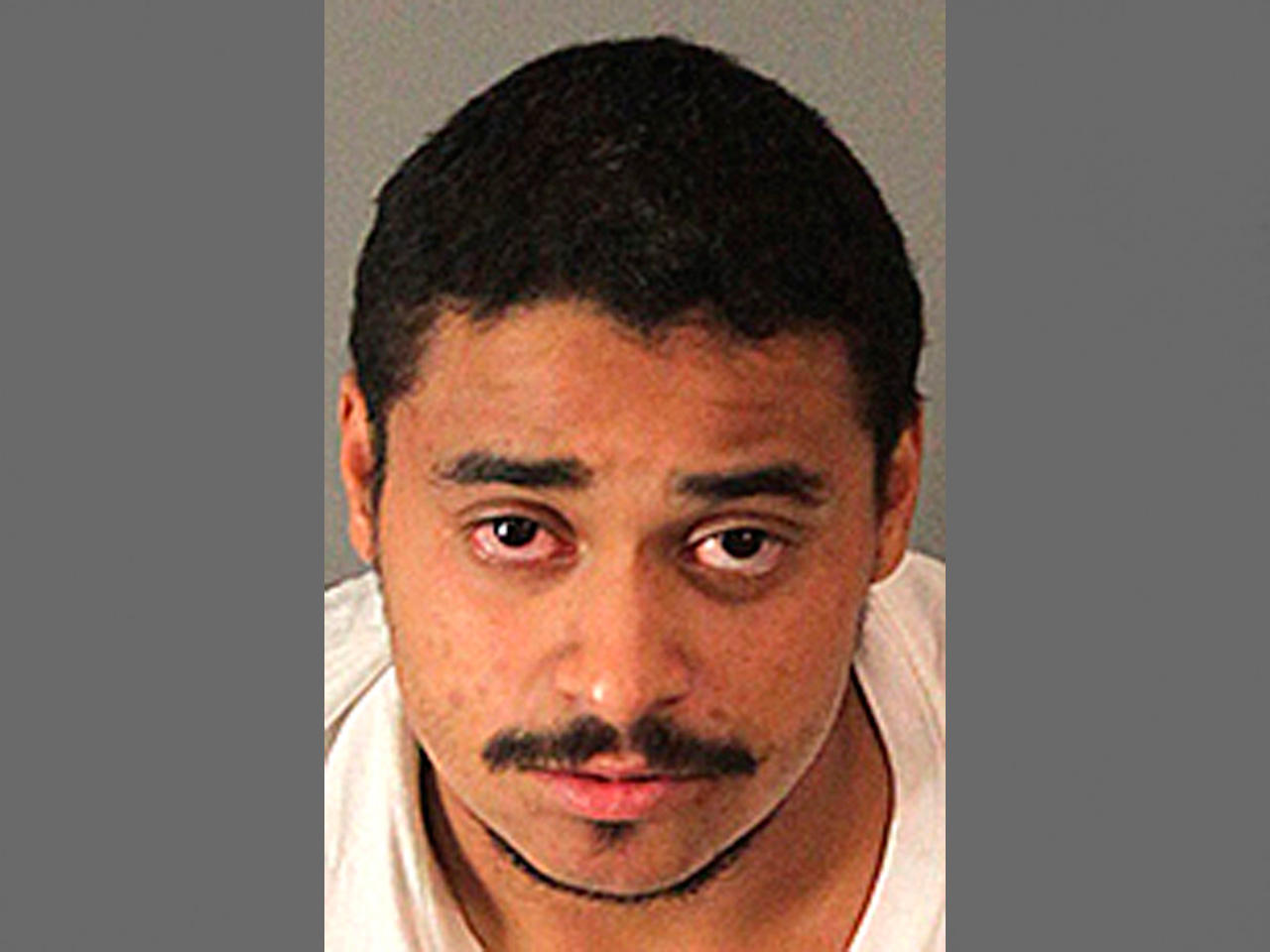 PALM SPRINGS, Calif.  In the minutes before three Palm Springs officers were shot, two fatally, the suspected gunman’s father told a neighbor his son was armed, “acting crazy” and wanted to shoot police.

John Felix, 26, was apprehended early Sunday after a lengthy standoff and faces charges including two counts of murder on a peace officer.

Authorities said Felix emerged wearing soft body armor after police shot a chemical agent into the home where he was holed up for hours.

Chief Deputy Ray Wood of the Riverside County Sheriff’s Department says John Felix was not carrying a gun but had several magazines of ammunition on his body when he exited through the back door early Sunday.

Wood says the 26-year-old was not cooperative and police shot him with non-lethal rounds before his arrest.

Prosecutors say Felix will be charged Tuesday with multiple counts including murder.

A parade of mourners created a makeshift memorial for two slain officers during an emotional vigil held outside the Palm Springs Police Department Sunday night.

Police said Felix suddenly pulled out a gun and opened fire on the officers who had responded to a family disturbance call Saturday afternoon at the home in a quiet neighborhood of this desert resort city.

A neighbor, Frances Serrano, told The Associated Press that the suspect’s panicked father, Santos Felix, said his son, an admitted gang member, had a gun.

“My son is inside and we’re scared, he’s acting crazy,” Serrano said the older Felix told her. When it was suggested they call the police he said, “Yeah, he already knows they are coming, and he is going to shoot them.”

Serrano said she went back inside her house and within minutes police cars arrived and gunfire erupted.

Zerebny, 27, had been with the department for about 18 months and recently returned from maternity leave after giving birth to a daughter. Vega, a married father of eight, was a 35-year veteran who planned to retire in December. He had been working overtime Saturday on his scheduled day off.

The wounded officer’s name was not released.

Police arrested Felix, who was taken to a hospital for treatment of injuries that did not appear to be life-threatening.

Reyes indicated police had had previous dealings with the suspect, but declined to elaborate.

Court records show Felix is a gang member who was previously sentenced to four years in prison in a failed murder plot in 2009. Documents cited by the Desert Sun newspaper reveal Felix was charged with attempted murder but pleaded down to assault with a firearm and admitted his gang connection.

Documents also show Felix was the subject of a forceful arrest three years ago at the same house where Saturday’s shootings occurred.

Riverside County SWAT officers quickly sealed off the residential neighborhood as police evacuated some residents. They told others to stay inside their homes, keep their doors locked and not to open them for anyone.

As the lockdown continued, scores of police officers gathered at Palm Springs Desert Regional Medical Center to offer a somber salute as the bodies of Zerebny and Vega were loaded into white hearses for transport to a coroner’s office.

It had been 54 years since an on-duty uniformed police officer was killed in Palm Springs, a city of 45,000 residents about 100 miles east of Los Angeles, known for its desert views, boutique hotels and golf courses.

In front of police headquarters, scores of local residents gathered to leave flowers, balloons and cards.

Vega had submitted his paperwork to retire at the end of the year after a long and decorated career, Reyes said.

“Here he is, 35 years in, still pushing a patrol car for our community to make it better — on a day he wasn’t even scheduled to work,” the chief said.

Reyes called Zerebny a “wonderful, young, dedicated female officer that pressed forward every day to make it better for everybody else.” She and her husband, a Riverside County sheriff’s deputy, were new parents to a four-month-old baby.

“I don’t even remember anything so vicious and cruel,” said Palm Springs resident Heidi Thompson. “These officers are responding to a domestic call for somebody in need that they don’t even know. They put their life on the line for us, the community. And they get gunned down? I don’t understand it.”

The shooting occurred just three days after a popular Los Angeles County sheriff’s sergeant was shot and killed in the high desert town of Lancaster.

Sgt. Steve Owen was answering a burglary call when sheriff’s officials say he was shot by a man who then stood over him and shot him four more times.

A paroled robber has been charged with murder.

Hundreds of residents held a candlelight vigil Saturday night in his honor.