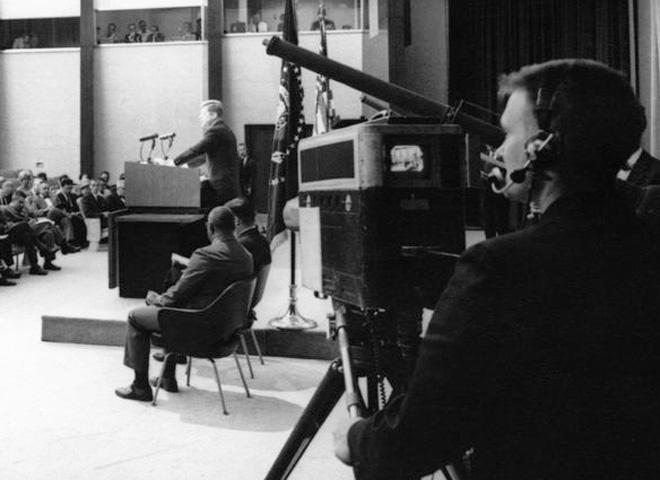 Our 35th president, John F. Kennedy, was born 100 years ago today. CBS News contributor Bob Schieffer explores how the youthful scion of a prominent family mastered a new media and rode it into the White House.

With the youth and glamour and excitement that the Kennedys brought to the White House, they turned the black-and-white movie of American politics into blazing technicolor.

And then with his tragic death, John F. Kennedy became not just an icon but an almost mythical figure. To many, the Kennedys became America's royal family.

JFK had some real accomplishments. He created the Peace Corps. He committed America to go to the moon, and we did. But most of all, he inspired young Americans to public service.

The one thing that had the most to do with shaping his presidency was the thing that got him elected: television.

JFK was our first television president.

The nation had never seen a presidential debate until the little-known senator from Massachusetts faced Republican Vice President Richard Nixon in 1960.

Historian Robert Dallek remembers Kennedy as cool and presidential; not so, the vice president.

"Nixon was sweating," Dallek said. "Makeup was running down his face. Somebody else said he looked as if they had him embalmed before he had died. And this gave Kennedy a significant advantage."

Those who heard the debate on radio thought it a draw -- some even thought Nixon won.

But those who watched on TV thought Kennedy the clear winner. In what would be a very close election, analysts said the TV debate tipped the election to Kennedy.

Kennedy became the first president to allow live coverage of his news conferences, and he held on average one every 16 days.

"He called it 'The Six o' Clock Comedy Hour,'" said Dallek, "and the journalists loved him because he was witty, he was charming, engaging and handsome."

Kennedy was briefly a newspaperman in his youth. He understood the power of the press, and understood how to put himself and his family in the best light.

Through the new medium, Americans came to know Kennedy in a more personal way than any of his predecessors -- which made his tragic death that day in Dallas all the more difficult to accept. As a nation we had never experienced anything like it.

For the first time, an entire nation had watched the horrendous scenes unfold in real time, and those who saw it would never forget.

"The fact that Kennedy was assassinated has contributed to this idea that he is a kind of immortal figure," said Dallek. "He is frozen in our memories at the age of 46."

JFK'S presidency lasted just over 1,000 days. Even so, Americans still rate him among the top rank of modern presidents.

"He has a kind of charismatic hold on the public's imagination," said Dallek. "And now we live in a time when people are very disillusioned with politics, and with presidential leadership. And they look to the past -- it becomes a kind of lifeline."

The best politicians were the masters of the dominant medium of their time. The founders were great writers when most people got their news by the written word; Franklin D. Roosevelt was the first to recognize the power of radio; Kennedy was the absolute best at television.

Steven Levingston, the author of a forthcoming book about Kennedy, sees a parallel in his mastery of television and President Donald Trump, who used Twitter to great effect in the campaign.

"Both of these men, without maybe realizing it entirely, rode the new media of their era into the White House," he said.