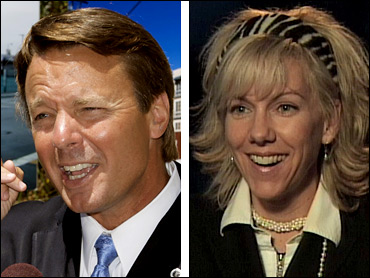 Former U.S. presidential candidate John Edwards, who won nationwide praise and sympathy as he campaigned side-by-side with his cancer-stricken wife, Elizabeth, admitted in shame Friday he had had an extramarital affair with a woman who produced videos for his campaign.

Acknowledging a sex scandal he had dismissed as "tabloid trash" only last month, Edwards said he had told his wife and family long ago but "I had hoped that it would never become public."

He denied fathering a daughter, born to the woman with whom he had the affair, and offered to be tested to prove it. A former Edwards campaign staff member professes to be the father.

The former North Carolina senator, who was the Democratic vice presidential nominee in 2004, confessed to ABC News that he had lied repeatedly about the affair with 42-year-old Rielle Hunter. Hunter's daughter, Frances Quinn Hunter, was born on Feb. 27 this year, and no father's name is given on the birth certificate filed in California.

"I made a serious error in judgment and conducted myself in a way that was disloyal to my family and to my core beliefs," Edwards said in a statement. "I recognized my mistake and I told my wife that I had a liaison with another woman, and I asked for her forgiveness … I have been stripped bare and will now work with everything I have to help my family and others who need my help."

In a conversation with CBS News chief Washington correspondent and Face the Nation host Bob Schieffer, Edwards said he came forward because he couldn't live with the constant scrutiny from the tabloids. He said that, for the sake of his family, he "just had to end it."

Schieffer also spoke with Elizabeth Edwards, who fought back tears while confirming that her husband told her about the affair in 2006 and that she forgave him.

"This is really, really tough," she said.

In a statement provided to The Associated Press, Elizabeth Edwards said her husband's affair was a "terrible mistake." But she said the healing process was "oddly made somewhat easier" after her diagnosis of breast cancer in March 2007.

She said she was proud of the courage her husband showed despite his shame and pleaded for her family's privacy to be respected.

In his interview with ABC News, Edwards recalled his wife's reaction to the news in 2006.

"She was mad, she was angry. I think furious would be a good way to describe it," Edwards said.

Edwards made a point of saying that his wife's cancer was in remission when he began the affair with Hunter. Elizabeth Edwards has since been diagnosed with an incurable form of the disease.

Edwards told Schieffer he has no intention of attending the Democratic National Convention in Denver later this month. When asked about his future plans, Edwards said, "I really don't know."

"Look, it's disappointing, but he's taken responsibility," said CBS News consultant Joe Trippi who was a top strategist in the 2008 Edwards presidential campaign. "He's admitted that he made a mistake. I know first-hand the love that Elizabeth and John Edwards have for each other-I saw it. And right now I think the most important thing is to give this family some space and let them continue their healing."

Edwards declared his presidential candidacy in December 2006. His wife was at his side that day and campaigned enthusiastically with him and by herself in the months that followed. She announced in March 2007 that her cancer, formerly in remission, had returned and there apparently was no cure.

She and her husband said it was important for the campaign to continue.

Edwards dropped out midway through this year's primaries after it became apparent he could not keep up with front-runners Barack Obama and Hillary Rodham Clinton. He recently endorsed Obama and has been mentioned as a possible running mate.

He was John Kerry's running mate in 2004 when Kerry lost to President George W. Bush.

"This revelation seriously damages Edwards' political future," said CBSNews.com senior political editor Vaughn Ververs. "It's a dramatic fall for the former vice presidential candidate who was widely seen as a potential cabinet member in the future or even a running mate for Barack Obama."

And last fall, in

an interview
with CBS Evening News anchor Katie Couric, Edwards himself cited infidelity as a character flaw voters might well count as disabling in a potential President:

"Of course. I mean, for a lot of Americans, including the family that I grew up with, I mean, it's, it's fundamental to how you judge people and human character - whether you keep your word, whether you keep what is your ultimate word, which is that you love your spouse, and you'll stay with them."

"In the course of several campaigns, I started to believe that I was special and became increasingly egocentric and narcissistic. If you want to beat me up feel free. You cannot beat me up more than I have already beaten up myself."

The National Enquirer first reported on the affair in October 2007, in the run-up to the Democratic primaries, and Edwards denied it.

"The story is false," he told reporters then. "It's completely untrue, ridiculous." He professed his love for his wife, who had an incurable form of cancer, saying, "I've been in love with the same woman for 30-plus years and as anybody who's been around us knows, she's an extraordinary human being, warm, loving, beautiful, sexy and as good a person as I have ever known. So the story's just false."

Last month, the Enquirer carried another story stating that its reporters had accosted Edwards in a Los Angeles hotel where he had met with Hunter after her child's birth. Edwards called it "tabloid trash," but he generally avoided reporters' inquiries, as did his former top aides.

In an interview, scheduled to air on ABC News' "Nightline" Friday night, Edwards said the tabloid was correct when it reported on his meeting with Hunter at the Beverly Hills Hilton last month.

A number of mainstream news organizations had looked into the adultery allegations but had not published or aired stories. But newspapers in Charlotte and Raleigh, North Carolina , recounted the Enquirer's allegations in prominent articles on Thursday.

The Edwardses have three children - Cate, Jack and Emma Claire. Another son, Wade, died at 16 in a 1996 car accident.

David Bonior, Edwards' campaign manager for his 2008 presidential bid, said he was disappointed and angry at Friday's news.

"Thousands of friends of the senator's and his supporters have put their faith and confidence in him, and he's let them down," said Bonior, a former congressman from Michigan. "They've been betrayed by his action."

Asked whether the affair would damage Edwards' future aspirations in public service, Bonior replied: "You can't lie in politics and expect to have people's confidence."

In 1999, when Edwards was a senator, he said of President Bill Clinton and his affair with Monica Lewinsky:

"I think this president has shown a remarkable disrespect for his office, for the moral dimensions of leadership, for his friends, for his wife, for his precious daughter. It is breathtaking to me the level to which that disrespect has risen."

In 2006, Edwards' political action committee paid $100,000 in a four-month span to a newly formed firm run by Hunter, who directed the production of four Web videos showing Edwards in supposedly candid moments as well as in a public speech talking about morality.

The payments from Edwards' One America Committee to Midline Groove Productions LLC started on July 5, 2006, five days after Hunter incorporated the firm in Delaware.

Midline provided "Website/Internet services," according to reports that Edwards' PAC filed with the Federal Election Commission.

Midline's work product consists of four YouTube videos showing Edwards in informal settings as he prepares to make speeches in Storm Lake, Iowa, and Pittsburgh, as gets ready for a television appearance on "The Daily Show With Jon Stewart" and travels in Uganda in 2006.

At the time Hunter was compiling the videos in 2006, Edwards was preparing his run for president.

Episode One of the four videos shows a conversation between Edwards and an unseen woman as the two chat aboard a plane about an upcoming speech in Storm Lake, Iowa.

Cutting between clips of the speech and the conversation with the woman, Edwards touches on his standard political themes, declaring that government must do a better job of addressing the great issues of the day, from poverty and education to jobs and the war in Iraq.

In 2006, I made a serious error in judgment and conducted myself in a way that was disloyal to my family and to my core beliefs. I recognized my mistake and I told my wife that I had a liaison with another woman, and I asked for her forgiveness. Although I was honest in every painful detail with my family, I did not tell the public. When a supermarket tabloid told a version of the story, I used the fact that the story contained many falsities to deny it. But being 99% honest is no longer enough.

I was and am ashamed of my conduct and choices, and I had hoped that it would never become public. With my family, I took responsibility for my actions in 2006 and today I take full responsibility publicly. But that misconduct took place for a short period in 2006. It ended then. I am and have been willing to take any test necessary to establish the fact that I am not the father of any baby, and I am truly hopeful that a test will be done so this fact can be definitively established. I only know that the apparent father has said publicly that he is the father of the baby. I also have not been engaged in any activity of any description that requested, agreed to or supported payments of any kind to the woman or to the apparent father of the baby.

I have given a complete interview on this matter and having done so, will have nothing more to say.