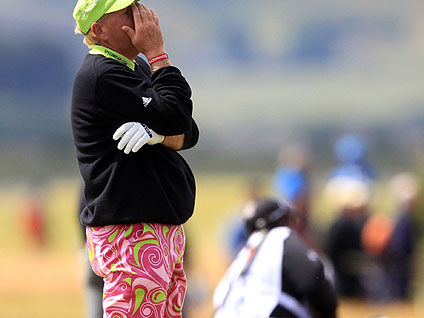 NEW YORK (CBS) Whoa, check out the pants on this guy. No, your eyes aren't playing tricks on you.

In the photo, John Daly is covering his face after playing a shot onto the sixth green during the July 16 British Open championship in Scotland. Is it possible he's shielding his eyes from the brightness of his lime green and medium pink paisley pants?

Though he looks as if he shares a haberdashery with the neon clown on the sign greeting drivers pulling into the Circus Circus Hotel-Casino in Vegas, Daly doesn't find the slacks off-putting.

According to the Wall Street Journal, he's worn them to such good effect in the first few rounds of the British Open, he lovingly refers to them as his "good luck start pants."

Just the day before, the droplet-shaped vegetable motif paisley-print pants he wore July 15 were enough to make even musician Prince jealous.

Hey, maybe other athletes could give this a go. Could be a new fashion trend. Maybe LeBron James could make this cool down in Miami? Then again, maybe, not.

Daly, hats off for your bravery and continued "luck" with those pants.