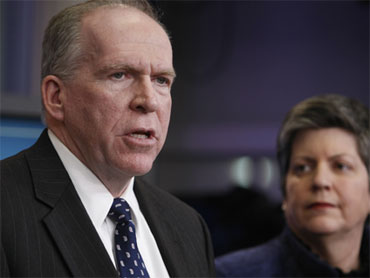 (AP)
The enormity of the threat from al Qaeda in the Arabian Peninsula (AQAP) is one of the most alarming pieces of information to come out of a review of the failures in the nation's security apparatus that led to the attempted Christmas Day attack, Deputy National Security Adviser John Brennan said today at a press briefing.

He said the fact that AQAP is an extension of the core al Qaeda group coming out of Pakistan was in his view "one of the most lethal, one of the most concerning" aspects of the report.

"The fact that they had moved forward to try to execute this attack against the homeland I think demonstrated to us -- and this is what the review sort of uncovered -- that we had a strategic sense of sort of where they were going, but we didn't know they had progressed to the point of actually launching individuals here," he said. "And we have taken that lesson, and so now we're all on top of it."

Brennan, President Obama's top adviser on counterrorism, said the intelligence the United States has gathered in the past several years suggested that AQAP was "aspirational" in its goals to bring an attack forward against the U.S. The intelligence community, however, was focused on its activities on the Arabian Peninsula, such as attacks against Prince Mohammed bin Naif in Saudi Arabia.

"We saw that there was this mounting sort of drumbeat of interest in trying to get individuals to carry out attacks," Brennan said. "And so, in hindsight now... we saw the plot was developing. But at the time, we did not know, in fact, that they were talking about sending Mr. Abdulmutallab to the United States."

The review of the attempted Christmas Day attack showed that in the weeks leading up to the event, the U.S. intelligence community was aware of a specific plot to strike the U.S. homeland, and they were aware that alleged terrorist Umar Farouk Abdulmutallab had extremist views. Those two pieces of information, however, were not pieced together.

"What it clearly indicates is that there is a seriousness of purpose on the part of al Qaeda in the Arabian Peninsula to carry out attacks here in the United States, whether they're reaching people through the Internet or whether or not, in fact, they are sending people abroad," he said. "What we need to do is continue to work very closely with our Yemeni partners and other international partners to make sure that we're able to drive al Qaeda down within Yemen, because they do present a serious threat there, but also abroad."

More on Obama's Remarks and the Report: