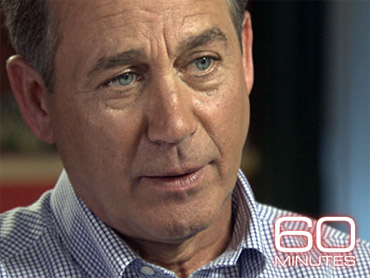 Some big changes are coming to Capitol Hill in January. The Republicans will be back in control of the House. John Boehner will be in charge.

It's his party, and as Congressional correspondent Nancy Cordes reports, he'll cry if he wants to.

Americans who watched "60 Minutes"last night saw a side of their new Speaker that is familiar to those on Capitol Hill - he cries.

The waterworks earned him some ribbing today.

"We call him the weeper of the House," Joy Behar said today on "The View." Barbara Walters added, "this guy has an emotional problem."

But in his 20 years in office, Republican John Boehner of Ohio has never been afraid to show his softer side.

Crying in public doesn't carry the stigma it once did. It derailed Ed Muskie's political aspirations in 1972, and haunted Pat Schroeder in 1989.

"It was seen as a sign of weakness," said David Corn of "Mother Jones." "You can't have someone who's going to go up toe-to-toe with the Soviets if they cry while campaigning."

Today, it's more acceptable, at least when men do it.

"When men cry, we shrug it off or we say isn't it nice that he's able to show his sensitive emotional side," said Norm Ornstein of the American Enterprise Institute. "When women cry, we go, oops, there go those emotions again, they can't serve in top public office, they're not tough enough."

"If I cry, it's about the personal loss of a friend or something like that," she said. "But when it comes to politics, no, I don't cry."

Boehner offered this explanation of "60 Minutes."

"I'm comfortable in my own skin. And everybody who knows me knows that I get emotional about certain things."

Boehner insisted that despite appearances, he has a thick skin. After last night's showing - he might need it.