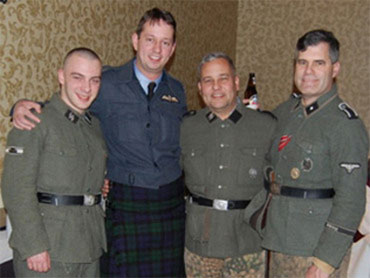 Senate Minority Leader John Boehner is being roundly criticized for his decision to campaign for Ohio congressional candidate Rich Iott, a candidate condemned even by another member of the Republican leadership, Eric Cantor, for Iott's past participation in Nazi reenactments

Iott recently announced on his website that Boehner will appear with him in a rally at the Lucas County Republican Party headquarters in Ohio on Saturday.

Iott has suffered in the polls since the Oct. 8 revelation of his former hobby, and CBS News now rates the race a probable Democratic win.

"Not only has John Boehner recruited, embraced, and financed a disgraced Nazi enthusiast running for Congress, but now Boehner is pouring gasoline on the fire by throwing a campaign rally for him," Rudominer said in a statement. "Thumbing his nose at our nation's veterans, women, and people of the Jewish faith, all the while refusing to stand up for basic American values in order to try and win an election, apparently this is what Boehner meant when he said, 'We're not going to be any different than what we've been.'"

Several Jewish groups have also spoken out against the Ohio Republican's planned appearance, and the American Gathering of Holocaust Survivors and Their Descendents has urged Boehner to reverse his decision.

"We ask Congressman Boehner to understand our pain and reconsider his appearance at the side of an unrepentant Nazi re-enactor," said Elan Steinberg, a spokesman for the American Gathering, adding that Boehner's place is "at the side of the victims of the SS - civilian adults and children, Allied and American POW's 00 not with someone who dresses up in the garb of mass murderers."

"We know that Rich Iott is not a Nazi," Steinberg said. "But his failure to apologize for his Nazi role-playing demonstrates a profound failure of moral judgement and sensitivity which cries out for a response."

In an email to the Huffington Post, Boehner spokesman Don Seymour explained the appearance this way: "Leader Boehner will be rallying Republican volunteers at the Lucas County Victory Center to support the local Republican Party's get-out-the-vote efforts. Boehner has been on the road headlining rallies for Republican candidates in Ohio and across the country, and he'll continue his busy campaign schedule into the final weekend before Tuesday's referendum on Democrats' jobs-killing policies." He did not directly address the controversy.

Eric Cantor, the Republican congressman who earlier this month denounced Iott and condemned his participation with Nazi re-enactments, declined comment to CBS News.