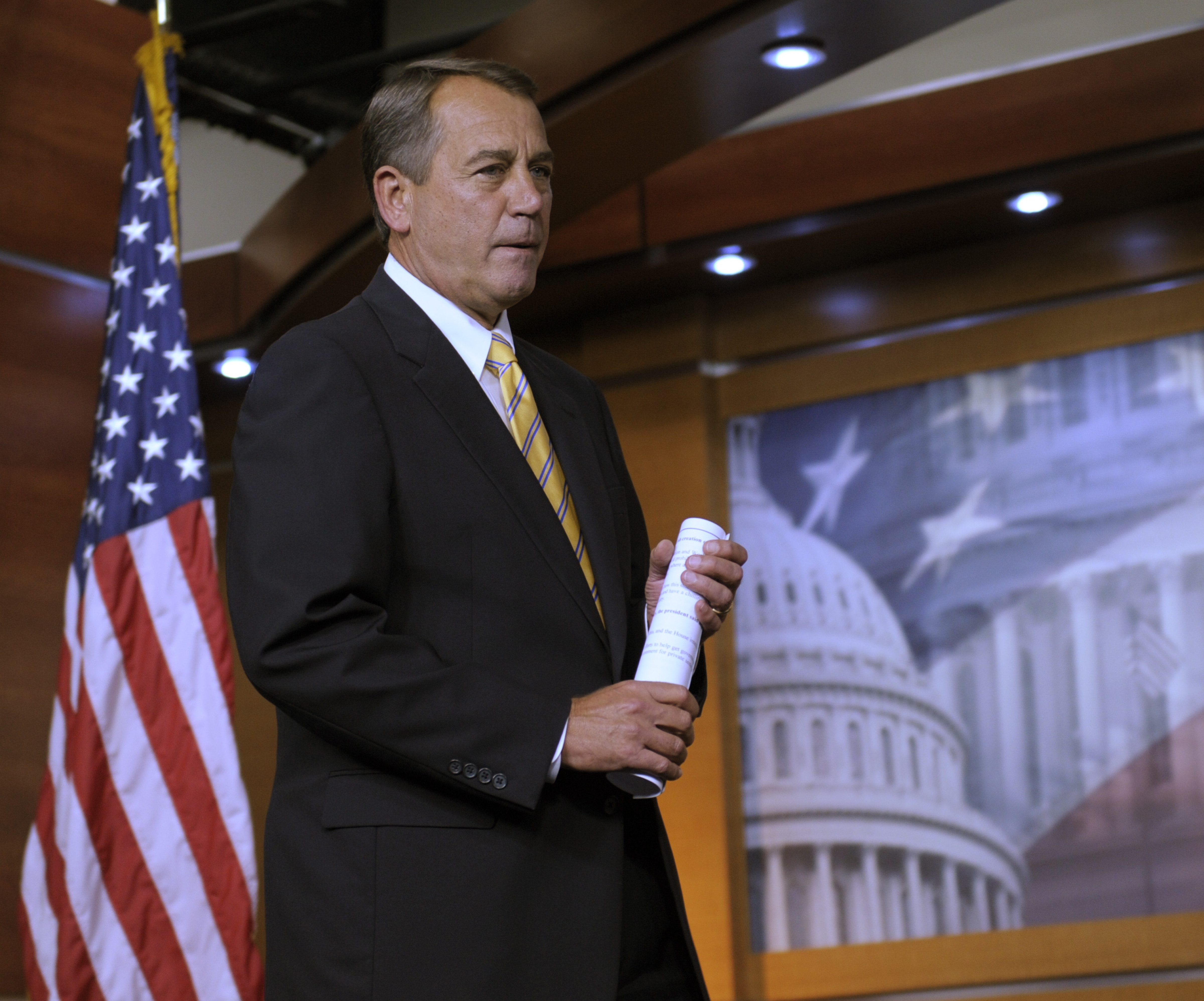 Nevermind that the heat index for the District on Friday is 120 degrees -- lawmakers will be sweating in their Washington offices as the clock ticks down toward a possible U.S. default.

The Senate on Friday rejected a Republican plan that would have made raising the debt ceiling contingent on passing a balanced budget amendment. Democratic leaders blasted the plan as bad policy and hardly worthy of consideration. But Boehner said today it's still the only plan to raise the debt ceiling that he supports.

Calling himself a "happy warrior" on behalf of the GOP plan -- dubbed "cut, cap and balance" -- Boehner said, "The House has done its job."

The speaker refused to acknowledge the need for an alternative plan.

"If [members of the Senate] don't like our version of 'cut, cap and balance'... then what's their plan?" he asked. "They can make amendments and send it back over."

But on the other side of the Capitol, the Senate was in the process of rejecting it. The Senate voted 51 to 46 to table the measure. While wrapping up remarks over the legislation, Senate Majority Leader Harry Reid decried the vote as a waste of time.

"It's interfering with negotiations and [the bill] is without merit," Reid said. "This is one of the worst pieces of legislation ever on the floor of Senate... and we as the Senate refuse to waste even one more day on this."

Sen. Kent Conrad, D-N.D., one of the senators involved in the separate, "gang of six" deficit reduction plan, said of the House GOP plan, "I don't think I have ever seen a piece of legislation more unprofessionally constructed than the legislation before us."

Sen. Patrick Leahy, D-Vt., called it "an afront to Constitution."

On the House side, Republicans emphasized that at least they have a plan.

"We've sent a budget. We've sent jobs bills over to the Senate. We have passed a bill that deals with the [debt ceiling]," House Majority Leader Eric Cantor said. "What has the Senate done? When is Harry Reid going to put forward his ideas?"

Reid noted that Congress has just 11 days to raise the legal limit the U.S. is allowed to borrow. Economists have warned that if the debt ceiling isn't raised by Aug. 2, the U.S. would risk catastrophic economic consequences, such as allowing the government to default on its loans.

The Senate leader referenced the reported negotiations between President Obama and Boehner. He said the Senate would wait for Boehner to present to Congress the outcome of those negotiations. "I wish them well," he said.

Boehner today, as he did yesterday, emphatically denied there is any deal in the works. "There was no agreement publicly, privately... Frankly, [we're] not close to an agreement," he said.

A congressional aide told CBS News yesterday that Mr. Obama indicated to Congress he was negotiating a deal with Boehner to cut $3 trillion from the deficit while making a promise to raise revenues in the future.

Boehner said today that he's been clear that any vote to raise the debt ceiling must be accompanied by serious spending cuts. "Whatever comes to the floor will meet that test," he said.

After the Senate tabled "cut, cap and balance," Boehner released a statement urging the Senate to "rethink their decision" and to immediately approve it.