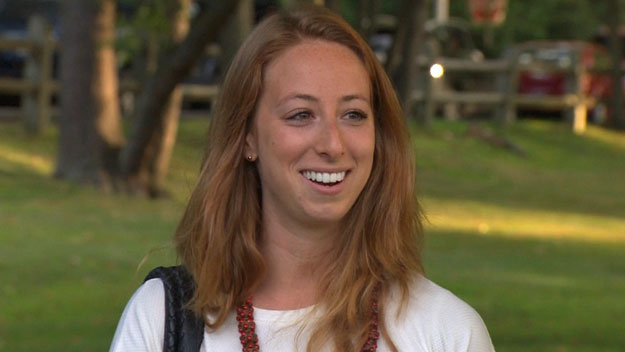 BROOKLINE, Mass. - A New York City woman visiting her parents in Massachusetts is being hailed as a hero for rescuing two children strapped in a stroller after they had fallen into a reservoir.

The woman, who asked that only her first name, Rebecca, be used, was jogging at the Brookline Reservoir on Monday when she noticed the stroller rolling toward the water. The mothers of the children had their backs to the stroller at the time.

Rebecca said the stroller rolled down a 10-foot embankment and fell in the water with the children face down.

The former lifeguard jumped in and turned the stroller the right way, then helped haul the kids to safety.

"By the time I got there the carriage was face down in the reservoir," Rebecca told CBS station WBZ. "So I jumped in and flipped the carriage and the children were buckled in and at that point it was waterlogged so I couldn't really take it out."

The mother of at least one of the children jumped into the water and then grabbed on to Rebecca, making it more difficult for her to get to the children, WBZ said.

"I was definitely out of breath from running, but I'm a pretty good swimmer," Rebecca said.

Holding up the carriage with the mother clinging to her, Rebecca made it to a point where she could stand up in the water. Others then helped get the kids out.

"As soon as I flipped it one of the little girls started crying, so I was like OK they weren't in there for too long," Rebecca said.

Authorities said the children, ages 18 months and 4 years, were checked out as a precaution and were OK.

Police praised Rebecca for her heroism and quick thinking.

"There's a higher power that has a plan and she was meant to be here today to save those kids," Brookline Police Sgt. Robert Disario said.