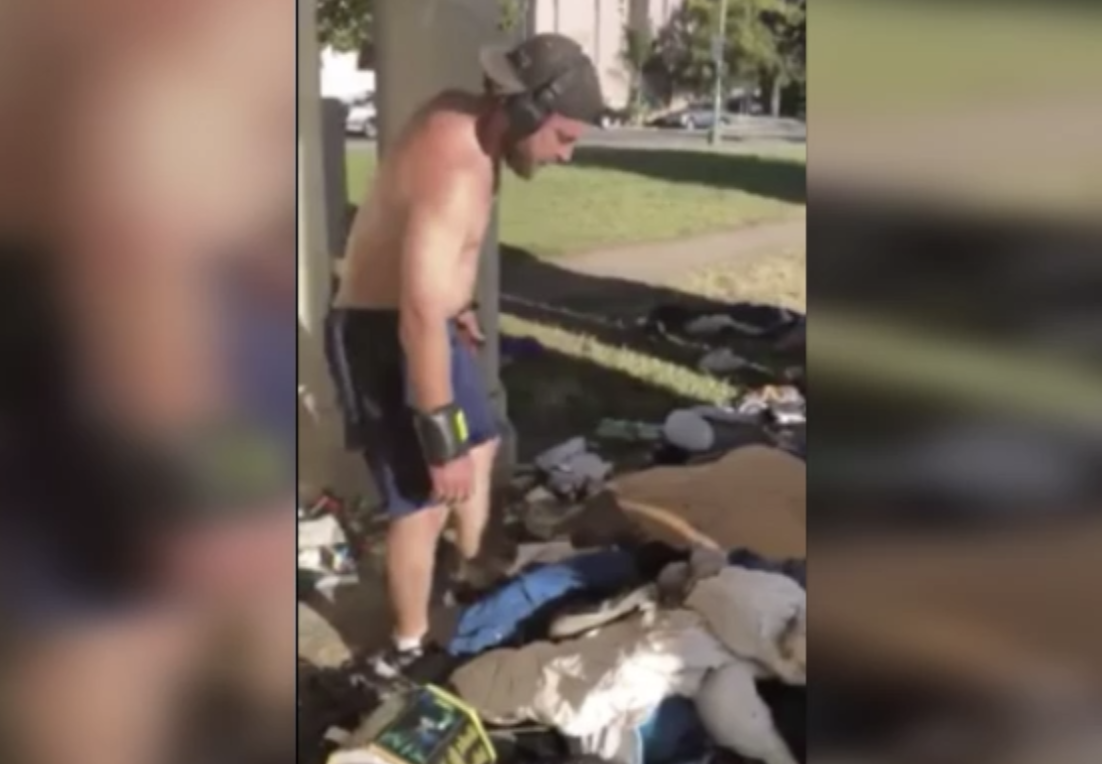 A man who was caught on camera throwing a homeless man's belongings into a lake last week has been arrested.

The man, originally known only as "Jogger Joe," was spotted near Merritt Lake in Oakland, California on Friday, June 8. Several bystanders stopped to talk to him and protest as he angrily threw out a homeless man's things. A witness named JJ Harris stopped to take video of the incident.

Harris' video shows the shirtless jogger bending over to gather armfuls of a homeless man's belongings while a woman tells him to stop. "Jogger Joe" drags the belongings to a trash can and some of them are seen floating in the nearby lake.

"What are you doing with this stuff, man?" Harris is heard asking in the video.

"He threw it in the lake," the woman tells Harris. She and "Jogger Joe" get into a heated exchange. "I'm not taking any of it, he [the homeless man] can pick it up," "Jogger Joe" says. Harris films various objects floating in the water.

As the video continues, the argument gets more heated and other bystanders join in. One bystander begins cursing at the jogger.

Harris posted the video on Twitter on Saturday and it has gone viral. "Yesterday in Oakland jogger found throwing a peaceful homeless man's possessions in the Lake. What has this town come to?!" Harris wrote. He used the hashtag #JoggerJoe and the nickname caught on.

"Jogger Joe" was eventually identified as Henry William Sintay, Bay Area newspaper The Mercury News reports. The next day, Sintay returned to the lake and was spotted wading in the water, pulling things out of it. A man named Matt Nelson took video of his exchange with Sintay that day.

Nelson asked Sintay what he was doing and Sintay responded "trying to do the right (expletive) thing" by cleaning up the lake. He denied throwing the homeless man's things in the lake the previous day. Nelson and others begin to ask Sintay questions. Sintay then steps towards Nelson and tries to snatch his cellphone.

"Are you out of your mind?" Nelson said as the men wrestled and exchanged profanities. Someone is heard yelling, but the fight is not seen on camera. Instead, shaky images are seen in the video, and then Nelson and others appear to eventually run away from Sintay -- all while live streaming on Facebook.

After both videos became widely viewed online -- outraging people in Oakland and around the U.S. -- Sintay was arrested. The 30-year-old was jailed on on robbery charges and was being held on $100,000 bail at the Santa Rita Jail in Dublin.

The homeless man whose belongings were thrown around by Sintay has been identified as Greg Markson. Most know Markson as "Jarew," The Mercury News reports. People in the area who saw the video began bringing Markson food and clothing.

A woman named Cari Geldreich says she offered to bring Markson's blankets to a laundromat for him, the paper reports. She describes Markson as very humble.

"Sometimes I take him a bag of apples," Geldreich told the newspaper -- a kind gesture that stood in stark contrast to what Markson experienced just days earlier from "Jogger Joe."