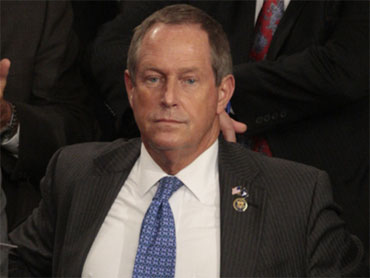 For his temerity, the obscure representative is obscure no more; his Twitter following more than doubled; his campaign coffers swelled; and all of Washington is talking about the moment as yet another nadir in our nation's political discourse.

The outcry about the outcry was as predictable as it is hypocritical. Our politicians say (or encourage their tribunes to say) the rudest things about one another in private, on the Internet, on the airwaves, or during speeches to their constituents. "You lie," is actually tame by these standards.

But we are shocked - Shocked! - when some of these same people forget their manners in the House Chamber? Why do we deign to tolerate the former and claim to abhor the latter?

We like to pretend that our system of government is more polite and more decorous than all the rest in the world but we are just fooling ourselves. Much in the same way that we live in denial about the long-lasting failures of our leaders to address long-term problems (health care, Social Security insolvency, global warming, energy independence, etc.) we live in denial about—and tolerate—an astonishing level of phoniness and mean-spiritedness in the political discourse over such matters. America is like the smiley, happy family that has all the bodies buried in the cellar.

To voters and the media, Washington still wants to try to maintain the façade that, deep down inside, apart from political gamesmanship, there is widespread mutual respect by and between foot soldiers of both parties. That's why many politicians still make the effort to clap during presidential speeches in the House Chamber even when they don't really feel like clapping. We are thus supposed to continue to believe there are genuine aspirations of bipartisanship, or nonpartisanship, even as gerrymandering ensures that ideologues on both the right and left keep getting elected into office and even as the clear and convincing proof of an overall lack of statesmanship and foresight piles up.

We should know better. There is genuine and volatile anger, even hatred, between members of the two parties and the gulf between ideologies is as wide as it has been in a long, long time.

Congressional Democrats booed and hissed at George W. Bush when he spoke in the House Chamber in 2004 and 2005. Are we really surprised it occurred again Wednesday night, during a time in our nation's history when citizens brings guns to speeches about health care and toss around like horseshoes words like "Nazi" and "Socialism"?

Rep. Wilson was rude to interrupt the president's speech—rude but not hypocritical. At least he had courage to candidly and publicly (and succinctly) express his views about the president's statement on illegal immigrants and health care coverage. The time and the place were wrong. But how about using the kerfluffle (Rep. Wilson has since apologized to the White House and the White House has since accepted the apology) to push for a meaningful public debate on the topic between the president and an eloquent Republican opponent?

Wouldn't Americans benefit from seeing ideological opponents confront one another, face to face, fact to fact, accusation to accusation, instead of continuing to settle for getting their information (or wallowing in misinformation or disinformation) from inaccurate television commercials or from radio and television demagogues?

In Britain and in Canada, during parliamentary sessions, elected officials harangue each other all the time; forcing each other to respond directly to questions about controversial issues. Sure, it gets loud and rowdy. But no less loud and rowdy than the cable talk shows each night.

Last night, America might actually have benefited from a spontaneous exchange between Rep. Wilson and the president over the issue that generated the outburst. We need more candid debate over these topics and fewer vapid applause lines; more expressions of genuine positions and fewer meaningless sound-bytes.

These are monumental times and health care reform is a monumental issue. I wouldn't teach my son to interrupt a speech but I'll take the politician who is rude and candid over the one who is polite and sneaky any day of the week.

(CBS)
Andrew Cohen is CBS News' Chief Legal Analyst and Legal Editor. CourtWatch is his new blog with analysis and commentary on breaking legal news and events. For columns on legal issues before the beginning of this blog, click here. You can also follow him on Twitter.
View CBS News In
CBS News App Open
Chrome Safari Continue