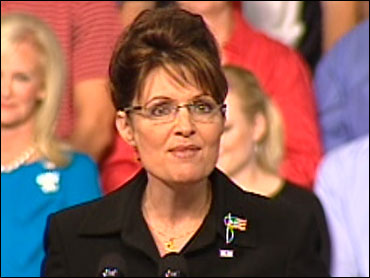 I have seen a lot of commentary on why John McCain's pick of Alaska Governor Sarah Palin is a cynical and transparent ploy to bring disaffected women who supported Hillary Clinton to his cause - and why this ploy would fail.

But I don't think John McCain and the people around him are that stupid.

Something else in his speech introducing Palin as his choice caught my attention and I believe shines some light on the real reason McCain chose the Alaskan.

McCain said of this pick "I have found the right partner to help me stand up to those who value their privileges over their responsibilities, who put power over principle, and put their interests before your needs...I found someone with an outstanding reputation for standing up to special interests and entrenched bureaucracies; someone who has fought against corruption and the failed policies of the past."

The McCain campaign plans on making an assault on Barack Obama's strength as a change agent. And challenge, what the McCain campaign will describe as, Obama's weak or non-existent attacks on corruption within the Democratic Party and other institutions throughout his career.

Like the Swift boat attacks of 2004 on Senator John Kerry, a decorated Viet Nam Veteran -- this assault will be on what is now a strength of Barack Obama's -- his focus on changing a broken system in Washington.

To make this assault, McCain picked in Palin someone who has taken on the corruption in the GOP in Alaska, turned against her own party's establishment, and fought for reform.

The McCain/Palin duo will challenge Barack Obama's claim of "a new kind of politics" and chastise Obama and Democratic vice presidential Nominee, Joe Biden, for their "silence" in taking on corruption in their own party in Illinois, Delaware and Washington, DC.

The McCain campaign intends to claim that "more of the same" in Washington means Barack Obama and Joe Biden and will make the argument that if you want to "shake things up" then McCain and his reform minded running mate from Alaska will get the job done.

My initial reaction was that in picking Palin, McCain had taken away the argument that Barack Obama wasn't ready to be president. I now think my initial assessment on that score was wrong. Over time, the McCain team will insinuate that if you think a first-term Governor isn't ready for the number 2 slot, are your really sure that a first-term Senator is ready for the number 1 spot?

There are flaws in all these arguments. There is McCain's own brush with corruption as a member of the Keating Five, as the country was wracked by the savings and loan scandal.

And Barack Obama has withstood the pressure of 19 months in the limelight as he secured the Democratic nomination, and proved he can handle the pressure--Sarah Palin has not. Palin could thrive and strongly help McCain make his case, or she could crumble and damage his candidacy. My first impression is that she is not going to crumble.

She isn't Dan Quayle, and besides, Dan Quayle was elected vice president.

Hurricane Gustav may hit the GOP convention as hard as it hits the Gulf Coast - but somewhere during his convention I expect John McCain to say "I love my party, but I love my country more."

Sarah Palin amplifies that part of the McCain brand, and helps to move McCain further from being identified with the Bush GOP, even while exciting some of the most conservative elements within it.

That's accomplishing a lot and none of it involves Palin garnering votes from women "just because she is one."

(Read this analysis and others at JoeTrippi.com)