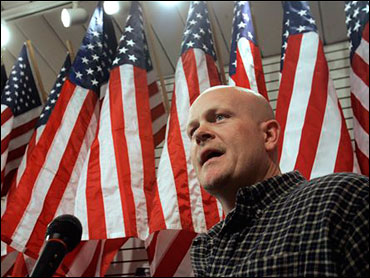 "Joe the Plumber" will likely clamor back into search engine trends and political water-cooler discussion this week after bashing his creator, Sen. John McCain, for "trying to use" him.

Sam Wurzelbacher, as Joe's family and friends know him, told Pennsylvania political reporter Scott Detrow in a weekend interview that he no longer supports McCain — or Sarah Palin, because she supports McCain, according to Detrow's blog.

Detrow says he spoke to average-out-of-work-American-turned-conservative-icon Wurzelbacher on the sidelines of a political event during which he endorsed Pennsylvania state Republican representative Sam Rohrer.

"Joe" has become a firm supporter of the conservative "tea party" movement — a grassroots uprising of Americans fed up with the mainstream GOP.

"McCain was trying to use me," Detrow quotes Wurzelbacher as saying about the veteran Republican senator. "I happened to be the face of middle Americans. It was a ploy."

He pulled no punches. When Detrow pointed out that McCain had given Wurzelbacher the platform from which he continues to purvey his cause, the response was fairly direct: "I don't owe him s—. He really screwed my life up, is how I look at it."

In Detrow's blog, there were no further quotes in which Wurzelbacher went on to explain exactly how McCain had "screwed up" his life.

"I think his ideology is un-American," Detrow quoted him as saying, "but he's one of the more honest politicians. At least he told us what he wanted to do."

Wurzelbacher bemoaned the so-called "birthers" and "truthers" — conservatives who question Mr. Obama's legitimacy as an American president based on his nationality and compare him to some of history's most detestable dictators.

He said such arguments only serve to drive some independents and Democrats who might otherwise support the tea party movement away.