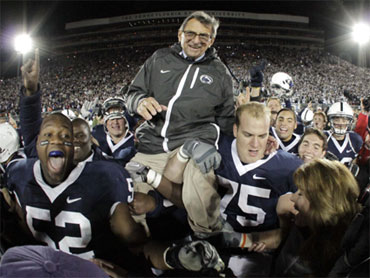 (CBS) - When Penn State head coach Joe Paterno announced his retirement Wednesday morning, he said he hoped the football team could finish its season with "dignity and determination." Retiring in the fallout from former coach Jerry Sandusky's child sex abuse scandal will certainly cast a shadow over Paterno's tenure at Penn State. But it would be impossible to overshadow Paterno's achievements in the sport throughout his Hall of Fame career.

Just how much did the legendary Joe Pa achieve in his life in football? Let's look at some numbers.

One. On the list of all-time winningest coaches in the FBS, Paterno is number one. No coach in the history of Division I college football has won as many games (409) as Paterno. The Nittany Lions coach is also one of only three active coaches inducted into the College Football Hall of Fame (alongside Nevada's Chris Ault and Saint John's University's John Gagliardi.)

Five. Coach Paterno has led five Penn State teams to undefeated seasons, the first way back in 1968 and the most recent in 1994. Of the five, only the 1986 team was awarded a national championship. The Nittany Lions also won a championship in 1982.

Twenty-four. With 24 bowl victories, coach Paterno has won more postseason games than any other coach in history. He is also in the record books for having the most bowl appearances at 37.

Sixty-two. That's the number of seasons Paterno has been a coach at Penn State. (He has been a head coach for 45 of those seasons.) This is far and away the record for any football coach at any university. Beginning in 1950, coach Paterno has been a member of the coaching staff for 691 games. Penn State has played 1,222 games in its history beginning in 1887, meaning JoePa has been on the sideline or in the booth for more than half (56.5 percent) of the university's entire football program.