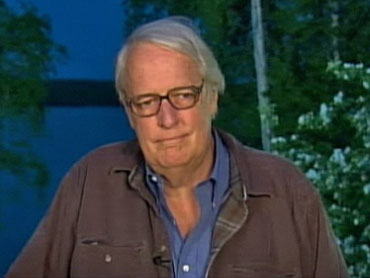 Last week, Sarah Palin took to Facebook and the airwaves to slam a journalist who moved into the house next door to her in Wasilla, Alaska, as he writes a book about her.

"Here he is - about 15 feet away on the neighbor's rented deck overlooking my children's play area and my kitchen window," Palin wrote. "Wonder what kind of material he'll gather while overlooking Piper's bedroom, my little garden, and the family's swimming hole?"

Palin also had a big fence erected on her property. (seen at left)

In an interview on NBC's "Today," McGinnis defended himself and called Palin's comments "ugly innuendo" and "revolting."

McGinnis said he didn't come to Wasilla to spy on the family, but instead traveled there to talk to her longtime acquaintances.

The author said he didn't expect attention for living in the house and chose it because the price was right -- $1,500 a month for the three or so months he plans to be there.

"The fact is I'd be living in this house if the Palin's lived on the moon," he added.

McGinniss is the bestselling author of "The Selling of the President," about Richard Nixon's 1968 presidential campaign. He also wrote a critical piece about Palin in Portfolio magazine last year.

When asked about whether what he was doing now was "creepy," he had this to say: "Creepy is as creepy does."

He added: "If I lived here and did something creepy, if I did what Sarah Palin is suggesting that I moved here because I had some desire to do, that would be creepy."

Over the weekend, the Wasilla newspaper the Frontiersman published an editorial that pointedly noted a state law that allows the use of deadly force to defend one's property.

The editorial in the Frontiersman, titled "Wasilla fence fascinating for national media outlets," concludes with this sentence: "Finally, those who are fond of Joe McGinnis [sic] might remind him (if he doesn't already know) that Alaska has a law that allows the use of deadly force in protection of life and property."

McGinniss responded to the editorial and reported death threats against him by comparing Palin's tactics to Nazi Germany.

"What I've learned from that...is very informative and I think is probably a lesson for the American people of the power Palin has to incite hated and her willingness and readiness to do it," he said. "She has pushed a button and unleashed the hounds of hell...And that's the same kind of tactic, and I'm not calling her a Nazi, but that's the same kind of tactic that the Nazi troopers used in Germany in the 30s. And I don't think there is any place for it in America."

The managing editor of the Frontiersman, Tom Mitchell, defended the editorial in an interview with CBS News.

"I didn't see it as being controversial. It's just a statement of fact," Mitchell said. "Plus, it was intended to be more humorous than anything."