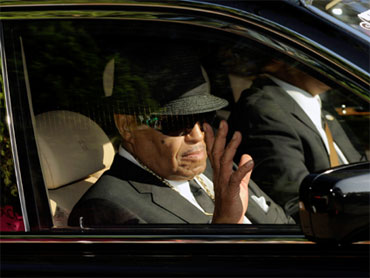 Michael Jackson's father does not stand to inherit any of his son's assets and cannot challenge the appointment of the executors chosen by the singer to handle his will, a judge said Tuesday.

Superior Court Judge Mitchell Beckloff said Joe Jackson was not named in the will but could pursue a motion to receive a family allowance from the estate because he claimed his son had been supporting him.

Joe Jackson and his son had an often-strained relationship, and Michael Jackson said at one point that he would get physically sick - as a child and as an adult - at the sight of his father.

Beckloff ended a contentious all-day hearing by telling Joe
Jackson's lawyer, Brian Oxman, that his client had no standing to
prolong the legal fray over Jackson's estate and would gain nothing
from doing so.

"I don't think he gets to step into this and create further litigation," the judge declared. "Joe Jackson takes none of this estate. This is a decision his son made."

In another development, the court released an accounting that the estate had paid nearly $1 million in expenses for the private family funeral held at Forest Lawn Memorial Park.

"I would have done it less expensively. But it was Michael Jackson, who was larger than life," Howard Weitzman, an attorney for the estate administrators, said outside court. "There's no reason he should not have a funeral that's larger than life."

Earlier in Tuesday's hearing, Michael Jackson's mother withdrew her objections to the appointment of two longtime Jackson associates as executors of his will.

The surprise announcement came from Katherine Jackson's new probate attorney Adam Streisand, who said his client felt it was time for the legal battle to end over the appointment of attorney John Branca and music executive John McClain.

Katherine Jackson now believes their appointment, as spelled out in her son's will, can "enhance the legacy of Michael Jackson in the best interest of his children," Streisand said.

It was Streisand's first major move in the case since he was chosen last month by Katherine Jackson to replace the team that had represented her since her son's death in June.

Beckloff later made the formal appointment of the executors after deciding Jackson's father could not challenge the move. Oxman threatened to appeal, which could interfere further with the appointments.

Streisand said Katherine Jackson decided she wanted to let the executors go about earning money for the estate rather than incurring more legal fees.

Oxman, however, accused her of reneging on an agreement with her family to challenge the executors and called the announcement in court "one of the most despicable things I have ever seen."

He accused Katherine Jackson of making a secret deal with the executors, a statement vehemently denied by Streisand and Weitzman.

Streisand said no one but he and Mrs. Jackson knew of her decision until he stood in court and announced it.

"All the credit goes to Mrs. Jackson," the lawyer said. "She is really the wise sage of this family."

The judge scheduled a hearing for Dec. 10 on Joe Jackson's request for a family allowance. Streisand suggested Katherine Jackson would support that request.

The will left Michael Jackson's assets to his mother, his children and children's charities.

Branca is an attorney who represented Jackson for more than 20 years and is regarded as the architect of his financial empire. McClain is a music executive and childhood friend of the singer.

Katherine Jackson's original legal team complained that she was not being given enough of a role in making decisions after her son's death. While they considered a challenge, the judge allowed the administrators to go forward with projects including the movie, "This Is It," which brought $60 million into the estate and became a box office hit.

Branca and McClain were credited as executive producers on the movie.

A 60-page motion filed by Oxman detailed Joe Jackson's bid to get money from his son's estate. The father is seeking an allowance to help cover expenses that exceed $15,000 a month, according to the court documents.

The documents said Joe Jackson receives a $1,700 monthly Social Security payment and had relied on his son for support for many years.

Joe Jackson suffers from diabetes and had a stroke in 1998, the filing stated.

A former steelworker, he managed and trained his children and organized the Jackson 5. He has been married to Katherine Jackson for 50 years, but he lists his home in Las Vegas. She lives at a family home in the San Fernando Valley north of Los Angeles.

The filings list Joe Jackson's age as 80 in one place and 81 in another.