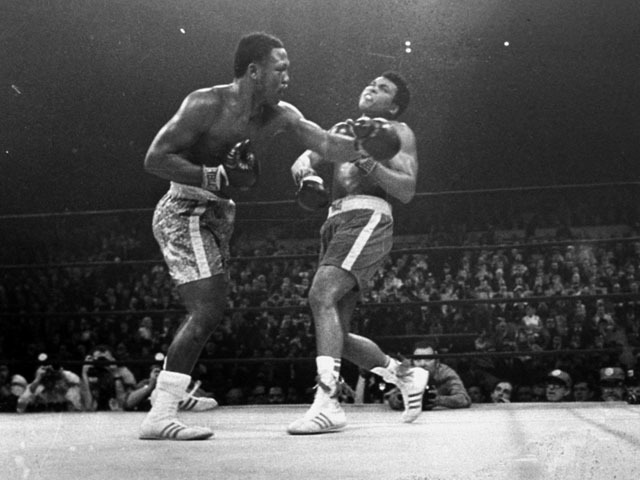 "Don’t you know I’m God?” taunted Muhammad Ali, in the first of the epic trilogy of heavyweight prizefights with Joe Frazier that defined the early 1970s. Ali even took to accompanying each word — Don’t — you — know — I’m — God? — with a swing of his fists, unleashing another flurry of his lightning-fast punches. Frazier, undaunted, singularly unaffected by Ali’s sophomoric doggerel and sophisticated psy-ops, kept boring in on his opponent, a steady, bobbing, weaving machine, and spat back through his bloodied mouthpiece: “Well, God, you gonna get whupped tonight!”

And very near the end of that first encounter between them, on March 8, 1971 — the Madison Square Garden spectacular between two undefeated heavyweight champions, billed, without hyperbole, as the Fight of the Century — Frazier made good on his promise.

It was 26 seconds into the 15th round. With his signature roundhouse left hook — the 30th he’d landed, the final explosion in a breathtaking night of fireworks — Frazier connected with Ali’s right jaw, snapping his head back and dropping The Greatest to the canvas. Bedlam at the Garden! Ali was up quickly, but with that one punch, “Smokin’ Joe” entered the ranks of the immortal, one of only two professional fighters ever to put Ali down. The pride of Philadelphia had answered definitively, at least for one night, the questions that haunted boxing, and America at large, at the close of the fiery Sixties.

Who would triumph: the beautiful dancer and satirical poet, or the grunting, uneducated working man? Was history on the side of anti-establishment rebels and countercultural heroes, or unalloyed toughness and Richard Nixon’s silent majority? At last, America had an answer: The uglier man, the less captivating figure, the African American who was darker and came from more impoverished southern origins, but whom Ali derided, inexplicably and unforgivably, as the Uncle Tom between them, the traitor to his people; yes, for one night, this man, Joe Frazier, would prevail. “What a man!” marveled screen legend Burt Lancaster, of Frazier, in his ringside color commentary.

For those of a different mindset, the great event proved altogether depressing. “A very painful experience in every way,” Hunter S. Thompson lamented in Fear and Loathing in Las Vegas, “a proper end to the Sixties . . . [with] Cassius/Ali belted incredibly off his pedestal by a human hamburger, a man on the verge of death. Joe Frazier, like Nixon, had finally prevailed for reasons that people like me refused to understand — at least not out loud.”

Frazier himself bristled at others’ ascription of political symbolism to him, and even more at his eternal association with Ali. Smokin’ Joe wanted to be known simply as a great fighter and a people’s champion, not another chapter — even the ultimate one — in the towering Book of Ali. In this sense, Frazier’s death, at the pitiably young age of 67, brims with the cruelties that pockmarked his life and boxing career. For while Joe Frazier was truly a great fighter, he was not The Greatest — cruel, but true — and there can be no discussion, Frazier’s desires notwithstanding, of Frazier without Ali.

Indeed, it is worth pondering whether even Frazier’s transcendent moment of triumph over Ali would ever have come to pass had Ali himself been less a man. Had he bowed to the establishment — of which even William F. Buckley Jr. acknowledged Ali, in 1989, to have been “a special victim” — and accepted the call of the Vietnam-era draft board, staging easy exhibition matches for starstruck GIs across the Mekong Delta, Ali would never have been banned from professional boxing during the peak of his athletic prowess: from April 1967 to October 1970, by which time he had turned 28.

And had Ali’s reign as champion continued unchecked across the latter third of the Sixties, it is likely that the dwindling ranks of suitable opponents for The Greatest would have produced, in boxing circles, an irresistible clamor for Ali to meet Frazier, a hero of the 1964 Tokyo Olympics, much earlier than March 1971. And in such circumstances, Ali would have made short work of Frazier: The Ali of 1967 was faster, sharper, less given to tomfoolery in the ring, flat-out better, than the Ali of 1971, and Frazier would not yet have reached his prime. What’s more, their showdown at the Garden was only Ali’s third bout after his three-year layoff, and it came just 90 days after Ali had endured 15 grueling rounds, in the same Madison Square Garden ring, against the confounding Argentinian slugger Oscar Bonavena.

Another cruelty of history and fate: Frazier attained the heavyweight championship only because he won the elimination tournament held after Ali was stripped of his license to fight. The capstone moment for Smokin’ Joe came on Feb. 16, 1970, when he defeated an otherwise forgotten heavyweight named Jimmy Ellis — best known as Ali’s sparring partner and the first opponent Ali would fight (and beat) after his historic loss to Frazier.

Crueler still: The boxing call most enduringly associated with Smokin’ Joe — perhaps the most famous boxing call of all time — is a testament to Frazier’s complete destruction, an oral epitaph at the nadir of his career: Howard Cosell’s hoarse battle cry of “Down goes FRAY-zhuh! Down goes FRAY-zhuh! Down goes FRAY-zhuh!” in the first round of the fight in which Frazier lost his heavyweight belt to George Foreman, in Jamaica, on Jan. 22, 1973. Foreman’s punches literally lifted Frazier off the canvas, and put him back down there, six times in two rounds.

A final cruelty: The Ali–Frazier–Foreman axis served, with unusual clarity, to disprove the applicability of the transitive property to sports. If A is greater than B, we all learned, and B is greater than C, then A must also, by definition, be greater than C. Not in boxing. Frazier floored Ali, and Foreman annihilated Frazier, so in transitive terms, Foreman should have absolutely decimated The Greatest. But in the Rumble in the Jungle, the Foreman–Ali fight held in Kinshasa, Zaire, on Oct. 30, 1974, and memorialized in the documentary When We Were Kings, Ali easily KO’d Foreman in eight rounds. In an instant, Ali became not only the first boxer to regain the heavyweight championship, but the undisputed conqueror of the transitive property.

That wasn’t really the final cruelty, of course; there followed the long anticlimax of Frazier’s post-championship life and career, and the irrevocable sentence he was doomed to serve out, as a character in the inescapable Book of Ali. But wherever Joe is smokin’ today, whatever ring now trembles at his plodding, bobbing, weaving, left-hooking genius, let us honor his humanity with the fervent wish that the place is packed to the rafters with appreciative fans, all there to see Joe Frazier, good and decent man, heroic fighter and heavyweight champion, and no one else.

Bio: James Rosen is chief Washington correspondent of Fox News. He is the author of The Strong Man: John Mitchell and the Secrets of Watergate and is at work on a book about the Beatles. The opinions expressed in this commentary are solely those of the author.