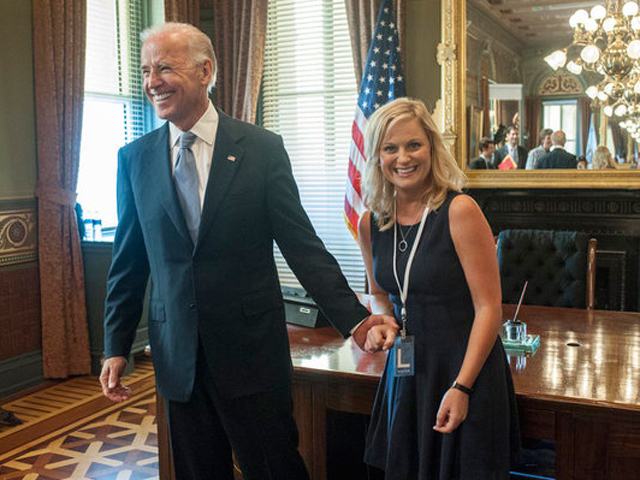 Vice President Joe Biden made his prime-time acting debut Thursday, guest-starring as himself on NBC's "Parks and Recreation."

The appearance took place at the beginning of the episode, when Ben Wyatt (Adam Scott) arranges a meet-and-greet with Biden for Leslie Knope (Amy Poehler) as an engagement present.

Knope's fascination with the vice president has been well-documented on the show (the character once described her ideal man as needing "to have the brains of George Clooney and the body of Joe Biden). Needless to say, the Pawnee, Ind., councilwoman was overwhelmed when she met him in person.

"You must be Leslie Knope," Biden said as he greeted her. "Welcome, welcome."

"You're -- my name just came out of your mouth," Knope responded breathlessly.

She went on to volunteer to take over for Hillary Rodham Clinton as secretary of state, told Biden he was "very handsome" and warned a Secret Service agent, "Don't let anything happen to him, you understand me? He is precious cargo."

The cameo was filmed over the summer, when "Parks and Rec" traveled to Washington to film scenes for its fifth season premiere. Biden's appearance was taped under strict secrecy, executive producer Michael Schur told The New York Times last week. The show had been warned that if word of the vice president's cameo got out before the election, provisions might have to be made to give Republican vice presidential candidate Paul Ryan a similar role.

Tell us: What did you think of Biden's "Parks and Rec" appearance?