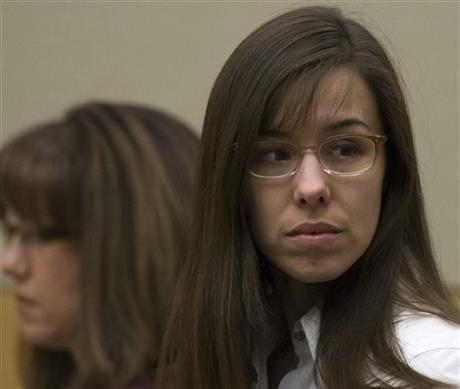 (AP) PHOENIX - As Jodi Arias' trial wraps up this week after four months of testimony, her fate rests in part on the testimony of expert witnesses who have offered up one clinical diagnosis after another for the small-town waitress and aspiring photographer from California to explain why she killed her lover five years ago.

Post-traumatic stress, amnesia, battered woman's syndrome and borderline personality disorder are among the conditions that various experts have offered to describe Arias, who is charged with first-degree murder in the stabbing and shooting death of Travis Alexander, 30, in his suburban Phoenix home in June 2008.

The jury must also come to grips with the defendant's ever-changing version of events. After initially denying involvement and later blaming masked intruders, she now claims she killed him in self-defense but doesn't recall details about the slaying.

Testimony continues Wednesday. The jury could get the case by the end of the week after closing arguments Thursday and Friday.

Arias faces a possible death sentence if convicted of first-degree murder. Authorities say she planned the attack on Alexander in a jealous rage. Two years after her arrest, she claimed self-defense.

VIDEO: Jodi Arias stands on her head in interrogation room

Testimony began in early January, and quickly captured headlines with lurid tales of sex, lies, religion and a salacious relationship that ended in a blood bath. The case spawned a virtual cottage industry for talk shows, legal experts and even Arias, who used her notoriety to sell her jail artwork, as it unfolded like a real-life soap opera for thousands of trial enthusiasts who followed every twist.

Jurors on Wednesday will hear from what will likely be the final witness, defense expert Robert Geffner, a psychologist and founding president of the Family Violence and Sexual Assault Institute in San Diego, Calif. His testimony will be aimed at countering a prosecution witness' contention that Arias suffers from borderline personality disorder.

The state witness, clinical psychologist Janeen DeMarte, testified that Arias showed signs of immaturity and an "unstable sense of identity." People who suffer from borderline personality disorder "have a terrified feeling of being abandoned by others," she said.

DeMarte also discounted defense experts' testimony during which they told jurors that Arias suffered from battered woman's syndrome, post-traumatic stress disorder and amnesia, which explains why she can't recall details from the day of the killing. DeMarte said she found no evidence to support the defense experts' diagnoses.

Geffner's part will be to convince jurors DeMarte is wrong.

It's a move that may play well for Arias as jurors could be left with a final testimony from a defense witness before hearing closing arguments, experts said.

"It can only help her on a case that most would say seems to be overwhelmingly in favor of the prosecution," said Los Angeles-area criminal defense lawyer Mark Geragos.

He said the move by prosecutor Juan Martinez to introduce the border personality diagnosis wasn't needed given the entirety of the damning evidence already presented by the state.

Now, Arias gets to leave the jury with yet "another emphasis on what her defense is," Geragos said.

And the borderline personality disorder diagnosis may help the defense argue against premeditation, given the disease is often marked by brief psychotic episodes.

"The defense will argue that even if you accept the prosecution's expert testimony that means that she could not be guilty of first-degree murder," Geragos added.

Phoenix criminal defense lawyer Julio Laboy said the expert testimony from both sides will be key during deliberations as jurors look for anything that may help explain Arias' behavior and lies in the days, months and years after Alexander's death.

"You have to have these third parties to help mitigate her inability to stay on track with her stories," Laboy said.

"What you have here now is the proverbial battle of the witnesses, and you may get a good grouping of the jury siding with the state's expert witness, but you also might get a couple that don't," Laboy said, adding that he doesn't think Arias has any shot at acquittal.

"The victory for the defense here will be saving her life," he said.

Arias' 18 days on the witness stand marked an unprecedented moment in a first-degree capital murder case, in terms of a defendant testifying for so long, Geragos said.

"In 30 years of practice, I've never seen it," he said, noting it may have helped the defense if she is convicted of first-degree murder, given jurors are less likely to recommend a death sentence if they feel they got to know Arias even just a little.

This may be evidenced in how jurors addressed Arias during some of their questions while she testified.

"I think it's significant that when the jurors were asking questions," Geragos said, "they referred to her not as the defendant, not as Ms. Arias, but as Jodi."