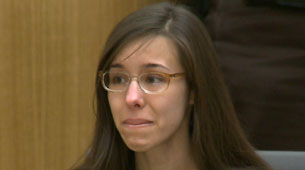 (CBS/AP) As she pleaded for her life to the same jury that convicted her of first-degree murder this month, Jodi Arias described her lover Travis Alexander's death as "the worst mistake of my life."

"To this day I couldn't believe I was capable of such violence, and for that I'm going to be sorry for the rest of my life," Arias said. "I was horrified by what I'd done and I'm horrified still."

Arias, 32, was found guilty earlier this month in the premeditated murder of Alexander, whose body was found slumped in the shower of his Phoenix-area home in June 2008. He was stabbed multiple times, had his throat slashed and was shot in the face.

Arias' comments came during the penalty phase of her trial, during which the jury will decide whether or not she is sentenced to death.

Jodi Arias Interrogation Video: "If I killed Travis I would beg for the death penalty"

Arias spoke of the pain and suffering she caused Alexander's family, and said she hoped her conviction brought them peace. Though she asked the jury to spare her life for her family's sake, she said Alexander's family suffered a greater loss than hers.

"I loved Travis, and I looked up to him," Arias said. "At one point he was the world to me. This is the worst mistake of my life. It's the worst thing I've ever done."

Describing the emotional testimony given to the court last week by Alexander's family members, she said, "I never meant to cause them so much pain."

"Steven [Alexander] says doesn't want to look at his brother's murderer anymore," she said. "If I get life, he won't have to."

Arias said she regretted that details of her sex life with Alexander came out during the trial, and described a recorded phone sex call played in open court as "that awful tape."

"It's never been my intention to throw mud on Travis' name," she said.

Arias became teary eyed as she recounted her mother describing her father's tears when Arias was convicted.

"She said in the 34 years they've been together, she's never heard him cry the way he did that day," Arias said. "I've caused them to hurt that way."

Arias said that she "lacked perspective" when she commented publicly soon after the verdict that she preferred the death penalty over life in prison. She said that thoughts of her own family prevented her from killing herself in prison, which she at the time likened to "taking myself off life support."

"I can't in good conscience ask you to sentence me to death because of them," she said, gesturing to her family. "Asking for death is tantamount to suicide."

She displayed dozens of pictures from her childhood, including photos of her family and former boyfriends. She told the jury that she can contribute to society if allowed to live, saying she'd like to start literacy, recycling and other programs in prison.

The jury recessed for lunch after Arias spoke. They were set to return at 1:15 p.m. Mountain Time.

Once deliberations begin, if the jury cannot reach a unanimous decision on sentencing, the panel will be dismissed and jury selection would begin anew, to seat another panel to hear arguments only regarding Arias' sentence. If a second panel were unable reach a unanimous agreement, the judge would sentence Arias to life in prison, with or without the possibility of release after 25 years.

Complete coverage of the Jodi Arias trial on Crimesider