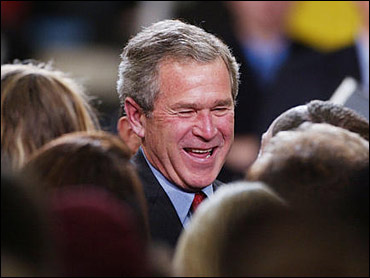 Trying to steal some of the spotlight from Democrats seeking his job, President Bush is highlighting upswings in the U.S. economy in three events this week, including one in Missouri, a state he narrowly won in 2000 and has been tirelessly courting ever since.

"We're growing," Mr. Bush said during a brief stop at SRC Automotive Inc., an employee-owned plant where 120 workers make and remanufacture engines and other parts for automobiles, boats and race cars.

"The growth is good. New jobs are being created. Interest rates are low. Home ownership in America is at the highest levels ever."

The economy is growing because "we cut your taxes," the president said.

The trip to America's heartland coincided with the release Monday of the president's 2004 economic report, a document prepared by his Council of Economic Advisers that is expected to underscore gains in the economy.

In that address, Mr. Bush said America has been able to surmount the bursting of the stock market bubble in early 2000 followed by the first recession in a decade, the terrorist attacks, two wars and corporate accounting scandals.

"Americans have responded to each challenge and now we have the results: renewed confidence, strong growth, new jobs and a mounting prosperity that will reach every corner of America," he wrote.

Democrats, who have seized on the troubled job market to boost their election prospects, quickly rejected the president's rosy view of the economy.

"I've got a feeling this report was prepared by the same people who brought us the intelligence on Iraq," Sen. John Kerry, D-Mass., the Democratic front-runner, said Monday to laughter from a crowd at a Roanoke, Va., firehouse.

Democratic Party vice-chairwoman Lottie Shackleford called the economic report a "fairy tale," noting that instead of creating jobs, the economy has posted a net loss of some 2.2 million jobs since Mr. Bush took office.

The president insists, however, that the situation is turning around, albeit slowly.

"It's happening. It's happening," Mr. Bush said in an NBC "Meet the Press" interview televised Sunday. "There is good momentum when it comes to the creation of new jobs."

Mr. Bush credits his tax cuts with improvements in the economy. Democrats say his economic policies aren't working all that well.

"If President Bush's policies had put America on the right track, he wouldn't be forced into a desperate game of follow the leader," Democratic National Committee Chairman Terry McAuliffe said Monday. "The Democratic primaries and caucuses are drawing a record number of voters, a fact that apparently has Bush and his campaign nervous enough to play second fiddle in state after state."

Nationally, the jobless rate fell to 5.6 percent in January, the lowest level in more than two years, as employers stepped up hiring -- but not fast enough to ally concerns about the prolonged job drought. Missouri's 5 percent unemployment rate in December was unchanged from November.

Different employment surveys paint contrasting pictures about the health of the economy, which has lost 2.2 million jobs since Bush took office. Factories have lost 3 million jobs in the last 42 straight months since a peak in July 2000.

The Labor Department said last Friday companies added 112,000 new jobs in January — the fifth straight month of payroll increases and the largest in three years. Some 366,000 jobs were added in the past five months, it said. Analysts, however, are looking for monthly payroll gains of 300,000 or more to demonstrate that the sustained job growth is indeed under way.

For a more optimistic look at the nation's employment situation, some economists point to a survey of households, which counts self-employed and contract workers. That survey, which Mr. Bush likes to cite, shows that employment jumped by 496,000 in January.