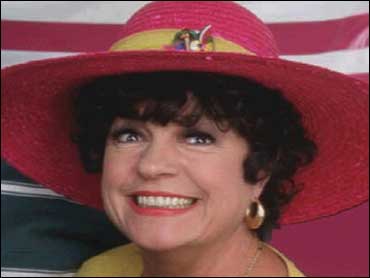 JoAnne Worley swirls into Angus McIndoe's, the Broadway theater hangout, notices a crooked painting on the wall, straightens it and then settles into a back corner table for a light bite.

But then Worley is a take-charge kind of gal, even more so on stage where her raucous comedy style is currently earning cheers in "The Drowsy Chaperone," the hit musical at the Marquis Theatre.

As Casey Nicholaw, the director of "Drowsy," puts it, "She just sort of knocks you over the head with it. There are no apologies at all: 'This is what I am, this is what I do -- and love me.' " And audiences do.

"For me, the show is a joyous ride," says Worley, describing the musical in which she plays the ditsy dowager, Mrs. Tottendale, a woman who knows how to wear a tiara and swing her pearls (a Worley specialty). "It's so beautifully constructed that doing eight shows a week is a pleasure and energizing."

Energy is what the actress is all about this quiet summer morning before the lunch crowd has started to drift into the restaurant.

It doesn't take long before Worley, dressed stylishly in a black, vaguely Mandarin-looking outfit and gold earrings, bursts into song. It's a little ditty she wrote for "Rowan and Martin's Laugh-In," that legendary, late 1960s TV hit that showcased her unique comedic talents.

"I'm loud, I'm loud, I'm proud that I'm loud," she sings. "People can hear me when I'm in a crowd. Those soft-spoken, shy folk would never be my folk 'cause I am a folk who is loud." She holds the last "loud" for full sonic effect.

"Thank god, we're in here alone," she says with a laugh before digging enthusiastically into a salmon salad. The impromptu warbling demonstrates Worley's sure way with a revue song.

The Indiana-born performer got much of her early show-biz education in Los Angeles with the fabled Billy Barnes, a master at creating revues. She worked with Barnes in California and came to New York in 1961 with "Billy Barnes People," a short-lived Broadway edition of one of his shows.

"When I first started, I was so dumb, but I did know how to make people laugh," Worley says. "All I know is I learned early on that I could do that, and it was a wonderful thing."

She remembers once, as a child, standing with a church choir in front of the congregation and chewing gum, pulling the gum out in a long string and then slowly nibbling it back into her mouth. "I got a wonderful laugh -- and in church," she enthuses. "Do you know how seductive that is?"

One of Worley's first New York theater gigs was standing by for Carol Channing in the original production of "Hello, Dolly!" But Channing, famous for never missing a performance, told her, "JoAnne, you will never have to go on." And she didn't. "I knew to trust Carol," Worley says. "I knew she was telling me the truth." But Worley didn't mind the inaction. At the time, she also was working with the fabled improv group, Second City, "so it was nice to get two paychecks."

It was Nicholaw who got Worley to come back to New York from California for more than just a short stay. Earlier this year, he cast her in a City Center "Encores!" concert version of the Stephen Sondheim-James Goldman musical, "Follies." In it, she belted the big production number, "Who's That Woman?"

"JoAnne is someone I've always wanted to work with," Nicholaw says, recalling that he was first blown away by her performance in a production of "The Pirates of Penzance" in Los Angeles.

"When I got 'Follies,' I said, "I don't know what part yet, but she has to be in the show,"' Nicholaw says. "I've always known how talented she is. Everyone just thinks of her from `Laugh-In' and that she only does that persona -- although we let her do a lot of it in `The Drowsy Chaperone' because that's the kind of show it is."

But, says Nicholaw, she is an accomplished musical-comedy actress. The woman has played just about every major female role -- from Mama Rose in "Gypsy" to Miss Hannigan in "Annie" to Lorelei Lee in "Gentlemen Prefer Blondes" to (finally) Dolly Levi in "Hello, Dolly!" and more -- in summer stock, regional theater and beyond.

When Georgia Engel, the original Mrs. Tottendale, decided to leave "Drowsy" last spring after a year's run, the director immediately thought of Worley.

Nicholaw told her to bring her big voice and her pearls, a comedy bit she learned from the great Beatrice Lillie, who got laughs by swinging a strand around her neck. She also got to work closely with Peter Bartlett, a veteran comic actor, who plays Tottendale's butler, Underling.

"I was a little scared that I wouldn't be able to keep a straight face -- I'd be giggling all the time," says Bartlett, who has appeared in such Paul Rudnick comedies as "Jeffrey" and "Mr. Charles, Currently of Palm Beach," as well as countless musicals.

"The delightful thing about JoAnne is that you can talk to her in the wings, have a wonderful time and then go on stage," he says. "There are a lot of people who have (great) reputations like she does but have forgotten to be people. She hasn't. She's just real coffee."

The two work together very closely -- within spitting distance, you might say. During each performance, they get to spray each other with what is supposed to be vodka martinis. "You really have to trust someone when they are spitting in your face and you're spitting in theirs," Worley says with a laugh. "But then we both want to serve the piece the best way that we can."

Worley is contracted to stay with "Drowsy" into December and then, most likely, she returns to Los Angeles.

These days, she also is president of Actors and Others for Animals, a California-based organization that promotes the spaying and neutering of pets. She got involved first by doing benefits for the group and then by joining its board. "If we could get everybody to spay or neuter their pets, there wouldn't be so many euthanized," she says.

Does she have her own canine companion? Of course. Harmony, a miniature Yorkie, who Worley believes is about 8 years old. "She was a rescue dog," the actress explains. "But everybody thinks she's a puppy because she only weighs five pounds."

"Harmony is my No. 1 consideration," Worley says. And the pooch stays backstage at the dog-friendly Marquis while her mistress works on stage. Other cast members go into Worley's dressing room to rub Harmony's tummy.

"It seems to be the Zen thing to do," Worley says. "And Harmony insists on it."
By Michael Kuchwara