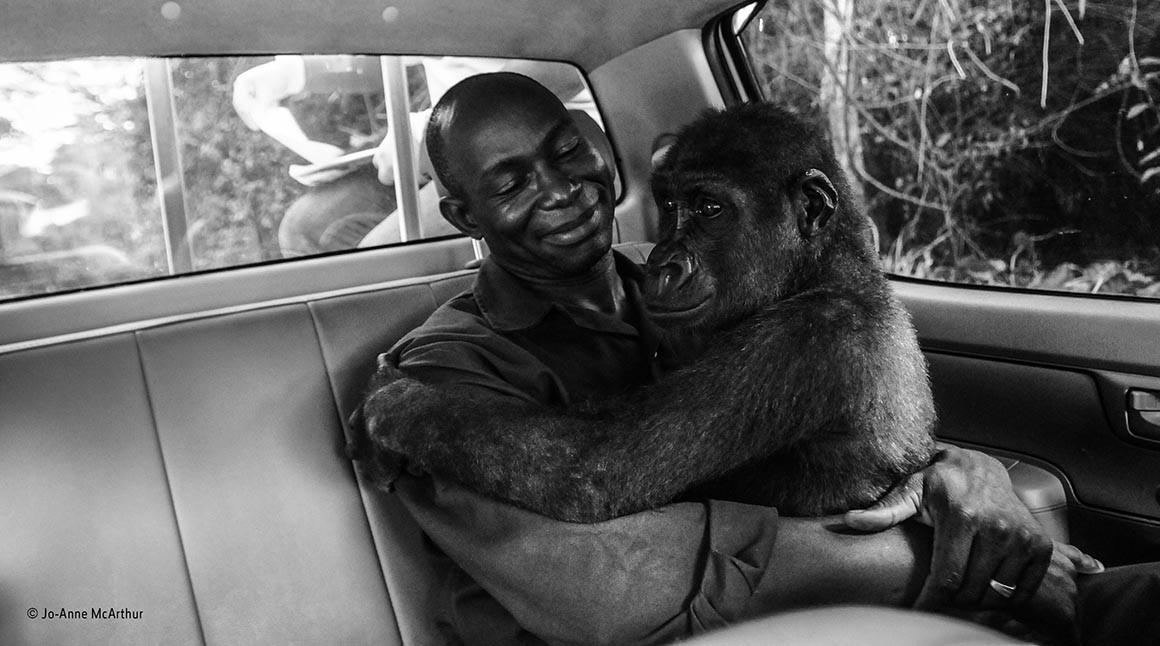 A heartfelt picture of a young gorilla embraced by her rescuer was chosen as the winner of the Wildlife Photographer of the Year People's Choice Award. The photo was captured by wildlife photographer Jo-Anne McArthur during a six-week stay as a volunteer at an animal sanctuary called "Ape Action Africa" in Cameroon.

The winning image shows Pikin, a lowland gorilla, waking up in the arms of her caretaker, Appolinaire Ndohoudou, while she was being moved between animal sanctuaries. McArthur, who was in the passenger seat, said she was "nervous" as she snapped photos of the pair, but had a feeling it was special.

"I knew in that moment it was truly unique," McArthur told CBS News in a phone interview.

McArthur's photo was picked from a shortlist of 24, selected by staff at the Natural History Museum of London from almost 50,000 entires submitted for the 2017 competition.

Upon learning her image earned the international distinction, McArthur was "overjoyed." However, she points out a darker reality about the heartwarming picture.

"I hope when people see the image they understand the context," McArthur said. "They should not be animals we should be cozying up to. Gorillas are dangerous animals. This situation is extraordinary."

McArthur explained that Pikin was survivor of the bushmeat trade, thus had to be taken care of humans so she could live.

"She can't be in the wild and she can't be released," she said. "She needs to be raised by hand in order to survive. This is a result of bushmeat trade."

Bushmeat trade is the practice of hunting and killing wild animals to sell as meat in both the country of their origin and for export. In Africa, more than 500 wild species are impacted, but bushmeat trade is particularly harmful to gorillas, chimpanzees and bonobos, whose small, endangered populations struggle to rebound from overhunting, according to environment conservation site Mongabay.

The photo shows a different side of the overall work from McArthur, who typically takes pictures of animal cruelty at zoos, aquariums and farms around the world. She had sharp criticism for places that let visitors touch animals because they're most likely sedated.

"Animals die because of these selfies we want to take," she said. "If it's a good organization, you're not allowed to touch animals. Animals should be as wild as possible."

McArthur challenges others to show more thought about how animals are treated.

"We often think of animals as parts instead of as a whole," she said."We think of wings, not the chicken, ribs but not the pig. I just want people to look and not turn away. I want them to think of animals critically."

The photo will be showcased at the Natural History Museum in London until May 28.