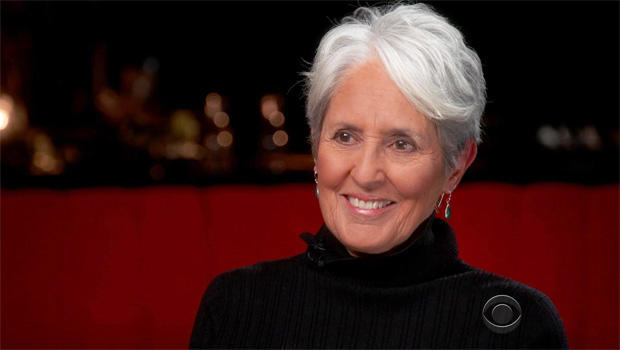 For more than 50 years Joan Baez has been an icon of the folk-music revolution and a global activist.  Shortly before her induction last night into the Rock & Roll Hall of Fame, Anthony Mason spoke with Baez about the honor.

“How does it feel to be in the Rock & Roll Hall of Fame?” he asked.

“A little bit silly, but really nice,” she replied.

What’s the silly part? “Well, that I am a little bit a fish out of water, but not.”

In the early 1960s, as the folk revival took root, Joan Baez emerged as its most prominent female voice.

She’d use her influence to introduce another young musician to the world, recording Bob Dylan’s songs and inviting him to join her on stage.

“Her voice,” Dylan said in a recent interview, “was like that of a siren off some Greek island.”

Calling her an “enchantress,” Baez said, “was as good as being called the Virgin Mary and all the rest of it.”

She admits that at the time, “I didn’t have a really good image of myself before that, so I thought that sounded pretty good. And then it was a lot to live up to.”

“What do you think of that Joan Baez now?” Mason asked.

“Really sincere. Really dedicated. I love hearing the voice that I don’t have anymore.”

She lent that voice to the civil rights movement, befriending The Rev. Martin Luther King Jr., and singing at the March on Washington in 1963.

She says music and social causes merged for her early. “My family was already very politicized and Quakers and active. So I’d made my mind up really early, that I thought it was a really bad idea to kill people.”

In 1967, jailed for protesting the draft during the Vietnam War, Baez would spend more than a month at a California prison farm.

“I learned something in there,” she said then: “You go into jail as a pacifist, you come out a stronger pacifist.”

In 1969 she performed at Woodstock, embracing its political causes, but not its drug culture. “I was always running into Janis Joplin and saying, ‘You wanna come over sometime and have tea?’ And she’d just look at me like I was crazy!”

Baez’s commitment to social action has never waned. Just this week she posted a new song on Facebook, “Nasty Man.”

“This thing just came bubbling out in the middle of the night. And it was called ‘Nasty Man’ about He Who Shall Not Be Named.”

You’re gonna build a wall, the big-liest wall,
the beautifulest wall ‘round our borders.
But here’s what I think,
You better talk to a shrink,
‘cause you got serious psychological disorders.

“Were you ever worried the protest song was a dying art?” Mason asked.

“You know, people are waiting for a ‘We Shall Overcome,’ they’re waiting for another ‘Blowin’ In the Wind’ and ‘Imagine.’ Hasn’t been written yet. But if music wasn’t involved in social change, then I ain’t interested, you know?”