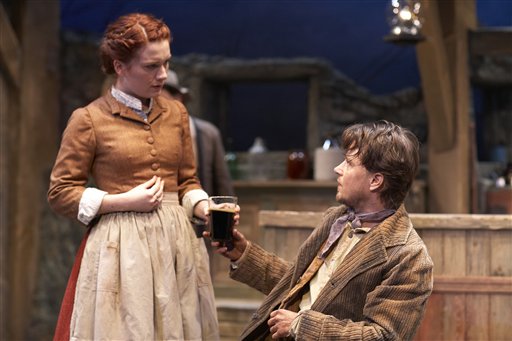 Celebrity doesn't change. Even 100 years ago, a person could rise swiftly in popularity, only to fall equally fast when the public changed its mind.

Satirizing the fickle nature of celebrity, Irish playwright J.M. Synge's dark 1907 comedy, "The Playboy of the Western World," is enjoying a rollicking off-Broadway revival by the Pearl Theatre Company.

The play focuses on the warm reception given to a handsome, young stranger, Christy Mahon (Sean McNall), as he wearily wanders into a simple country pub on the west coast of Ireland, reluctantly admitting that he has murdered his tyrannical father and is on the run.

McNall is appealing as the increasingly confident Christy, preening and swelling with pride as he is showered with praise, gifts and unprecedented attention from the women of the town.

Synge's colorful dialogue has all the characters exaggerating their sentiments with true Irish bravado. The talented cast has ably mastered a thick Mayo County dialect, and the theater program includes a glossary for some of the more obscure terms.

Pegeen's father has promised her in marriage to a local man with financial assets but not much personality, Shawn Keough, played to mopey perfection by Ryan G. Metzger. Nonetheless, Christy boldly woos Pegeen with poetic tales of the wonderful life they will have together.

When Pegeen becomes smitten with Christy, even battling a local widow for his affections, Christy delightedly muses, "I'm thinking this night wasn't I a foolish fellow not to kill my father in the years gone by." In a wonderfully drunken speech, Flaherty blesses their union, declaring, "A daring fellow is the jewel of the world."

After Christy displays great prowess at a sports competition, the widow Quin (a sly, amusingly predatory Rachel Botchan) goes so far as to declare him "the playboy of the Western world."

But when a stranger turns up to challenge his story, the villagers, including Pegeen, turn against Christy, branding him a liar and a coward. Joe Kady has blustery fun as the stranger who bursts Christy's bubble of fame. As Pegeen gradually comes to regret her betrayal, Stark's lively performance becomes movingly anguished.

J.R. Sullivan's direction makes the most of the space, especially in crowded scenes inside the pub, such as the battle when Christy fights to regain his freedom. Adding to the farcical tone, characters seem to tumble in and out of the pub, and often race around the small stage, creating the illusion of a larger space.

In a very funny turn, four of the actors become increasingly excited watching an offstage donkey race. Synge celebrated the power of the imagination, and this joyous production does him proud.